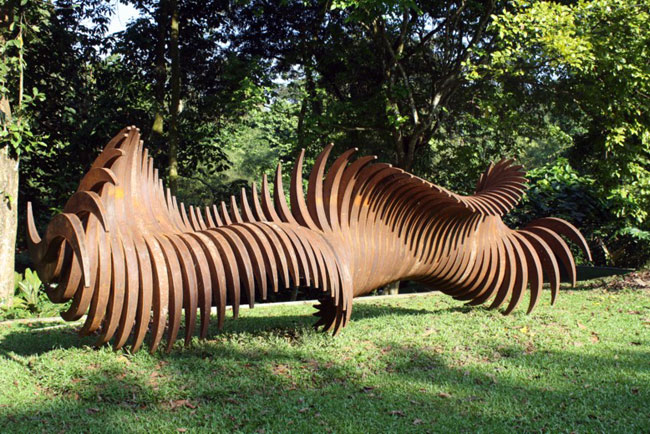 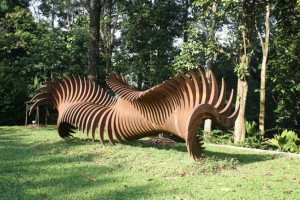 affecting everything that we perceive as tangible and implied, in an attempt to establish a complex relationship between art and architecture. When considering my work, it is necessary to be aware that current thinking suggests that each domain may be addressed in isolation from one another, and that academically there are perceptible similarities and differences between art and architecture. However, for me any distinctions are becoming more difficult to distinguish from what was preconceived. It is at this initially conceptual level that an intangible idea (re)shuffles between what can be classified as art and what architecture, and thus is materialized into the final body of work.

CONCEPTION Most of my work is derived from a sort of spontaneous, nonlinear, seemingly non-sequential contemplation between what could be and what exists, what is meant to be experienced and what is actually felt. It is from our surrounding natural and built environment, and consequently the interactions or lack of them, that we acquire knowledge and inform our thinking, and it is from others that we learn about the self and how to nurture any talent that God has given us. At this stage, I have come to perceive the self as a composite that is often contradictory and internally incomplete. Perhaps this is one way to relate to my work, in a sense that it is conceptualized and manifested in fragments and aggregates to reveal a certain personal characteristic that challenges the reader to engage with the work at various levels of interpretation.

CONFLICT It has been a struggle for me to envisage a three-dimensional non-planar composition such as a non-Euclidean design for a sculpture, which is represented on the two-dimensional plane in terms of plans, sections, and elevations. Even more difficult perhaps, is the need to acquire a sort of paradigm shift from thinking in terms of large-scale projects such as buildings, to a more subtle language that is better suited for a sculptural undertaking, much smaller in scale by comparison. Hence, the problem with physical models is that you can only do so many and while computer-aided designs are better for the diversified repetitive tasks, the form is only virtual and lacks the inherent property of the finished material to create a spatial-temporal relationship between the viewer and the work. These concerns have been an ongoing personal conflict and the result, whether successful or not, is apparent in the work. My undergraduate studies in architecture have undoubtedly molded a certain way of thinking in conceptualizing the physical body of the work.

PROCESS As a result of this particular way of thinking, the process of realizing an idea can be scrutinized as rather architectural in its approach, yet does not have the constraint architects normally face. It is said that one way of differentiating art and architecture is their different responses to objective requirements. Hence, if art is seen as speculative thinking, then what I am doing must be art by default since everything I do is conjectural and self-directed – though I am not implying that architecture is already art, or vice-versa. Consequently, I do not design the final works themselves, but am more oriented towards conceiving the possible relationship between solids and voids, which is more analogous to the notion of suggestive space. I prefer to consider this process as parallel to generating a conceptual system in order for the tectonic idea to be realized. This would result in the actual fabrication
being more feasible and practical in a sense that wastage of material is minimized and ease of fabrication is achieved, while still maintaining the desired result that was originally conceived.

DO-UNDO-REDO All of the possible generative sources are given adequate consideration during inception and this develops into a wide spectrum of architectural and artistic interpretation. Although difficult to describe, the work often begins from this infinite and productive intuition which is challenged and tested both physically and mentally. It then matures from the intangible realm of thought, propelled by its own internal energy, in an effort to consciously make something out of nothing. This is an iterative methodology of working and reworking an idea at various stages of the design development, and perhaps a feasible justification on the continuity of form that is apparent from one work to another. In a way, the coherence is a result of the consistent use of this repetitive method, which evidently is carried throughout the physical aspect of the work itself.

TECTONIC The works themselves are certainly ‘end products’ in their own respect. Basically, the final built objects are finite, well-defined, and are more or less free from the imperfections of the production process. Nevertheless, I still consider the works to be incomplete, schematic, trapped in the midst of their production, with potential to be further developed. Seen from this perspective, the work is left as if merely to engage other students and professionals within the field of art and architecture. However, as built and finished works they also have the opportunity to engage the public for whom they were meant and any subsequent unanticipated public. Therefore, the work is indeed offered with the intention of being read while addressing the reader with a multitude of interpretations, and to personally sustain the intellectual animation of the design process. 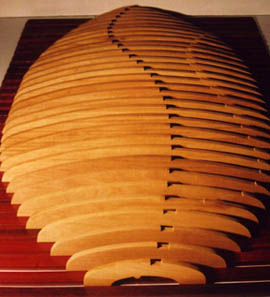 As a child, I was interested in drawing and won several competitions in Malaysia and overseas. The most recent and important being the Malaysian nominee and Asian finalist for the prestigious Oita Asian Sculpture Exhibition and Open Competition at the Fumio Asakura Memorial Park in Oita, Japan to be held in June 2002.

After secondary school, my interests broadened to theoretical thinking, science and engineering.  I studied architecture at the University of Adelaide, Australia and obtained a Bachelor Degree in Design Studies in 1996. I later obtained the Bachelor of Architecture with Honours at UiTM. I always longed to do fine arts while studying architecture and fortuitously an opportunity arose. I applied for the 2001 Rimbun Dahan Residency Program organized by Angela and Hijjas Kasturi at their residence at Kuang and was accepted as the Malaysian resident artist.

The year-long residency has revived my interest in fine arts and again in architecture, with a more serious conviction and undertaking. In my work, I attempt to highlight some of the issues related to space and temporality, the integration of technology and inspiration, truth and delusion, affecting everything that we perceive as tangible and implied, in an attempt to establish a complex relationship between art and architecture. 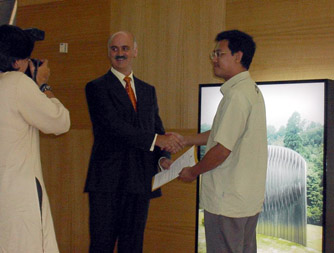 Above: Abdul Multhalib Musa has been awarded a 3 month residency at the Gunnery Studios in Sydney from June to August, 2004, sponsored by the Australian High Commmission in Kuala Lumpur. Here Talib receives the award from H.E. Mr. James Wise, the Australian High Commissioner to Malaysia, at the Australian High Commmission on Friday 23rd April. The announcement of the award coincided with the posters from the urbanart2003 project being placed in the lobby of the High Commission for exhibition. All five artists on display have been resident at Rimbun Dahan: Chong Siew Ying, Noor Mahnun Mohamed, Wong Perng Fey, Ahmad Shukri Mohamed and Abdul Multhalib Musa. The website for this Melbourne Tram Shelter exhibition is www.vicnet.net.au/~urbanart/