Afi Noor (b. 1990) is a poet based in Kuala Lumpur. She has read and performed in Singapore, London, and participated in 2016 Edinburgh Festival Fringe as part of KCL’s King’s Players. She ran Spill the Ink Poetry Lab, a monthly poetry workshop as part of SpeakCityAsia’s initiative, connecting established local and international writers with budding homegrown poets. Her poems are published in a chapbook called Ten Poems (2012) and featured in Kisah Journal by PUSAKA, Asian Centre Anthology of Malaysian Poetry in English, Rambutan Literary and When I Say Spoken, You Say Word Anthology.

Her current project, She Brings Monsoon aims to explore ways to capture the multifaceted essence of a Kelantanese Malay woman. By taking on the journey to dig through her own personal and shared narratives, rediscovering the vocabulary of the region, and grappling with the twists and turns between tradition and modernity, her poems took on the role to inform undocumented stories of hijabi and Kelantanese. These poems also try to investigate the possibilities – and limitations – constructed within the two languages: English and Kelantanese. These limitations will be further explored through body articulations as a performance poet. Her choice to don the hijab further enforces her artist statement – how much power does this cloth has, and can that power be depatriarchalized through unconventional states of the body?

Afi Noor is here for 2 weeks as a resident writer in our Southeast Asian Arts Residency program. She intends to use the time away from the city and familiar faces at Rimbun Dahan to write new writings related to her personal history. The natural surroundings and the visceral experience of staying in an actual kampung house may help her to be more aware of her senses and body as a Kelantanese Malay woman. 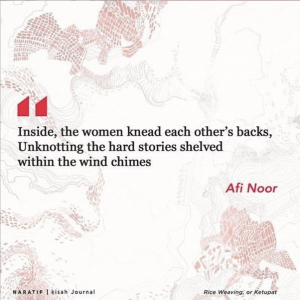 An excerpt from Rice Weaving from NARATIF | Kisah Journal (2016) https://www.instagram.com/p/BYMvXl6n7F0/ 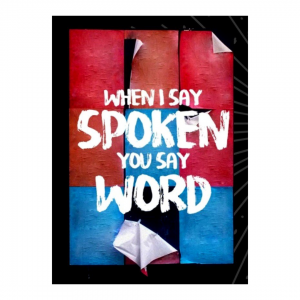 Included in When I Say Spoken, You Say Word Anthology (2018)