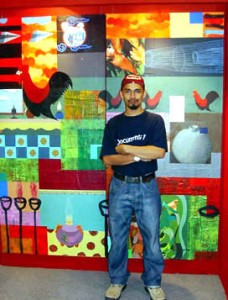 Work by Ahmad Shukri at the Singapore Contemporary Arts Fair, 2002.

Ahmad Shukri’s work for the Rimbun Dahan residency is as profuse and multi-layered as a tropical garden. The artist will exhibit paintings, installations and a large drawing on canvas, all in his highly decorative and richly referential style. 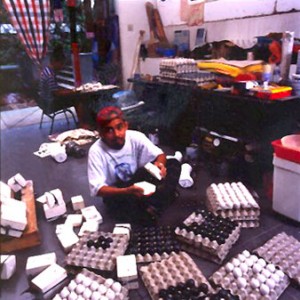 Out of the explosion of work in his studio he identifies four major series. Two installations of ‘incubators’, structures filled with hundreds of white and black plaster eggs, draw on the yin-yang concept to suggest the inevitably heterogeneous nature of the world. As Shukri puts it, within a hundred white eggs there will be a black egg, and vice versa.

The ‘people’s forum’ (sidang rakyat) installation consists of multiple pairs of boxing gloves cast in plaster and set atop a low table covered in a patchwork of textiles. For Shukri, the boxing gloves represent the sparring of politicians, while the textiles are the backdrop of unresolved and perhaps unresolvable situations against which their competitions take place.

A series of diskettes embedded in perspex sheets and overlaid with resin and silk-screen printing point to the irresistible spread of technology, which he sees as again neither wholly good nor bad but always composite. In the voyager series of paintings nature and culture morph into each other: the blades of a ceiling fan echo the petals of a flower and a chicken appears both as a living animal and as a child’s plastic toy. Whereas the installations illustrate socio-political conditions as Shukri sees them, he describes the paintings—featuring paper boats and planes, dragonflies, butterflies, cartoon characters, scrawled scraps of text—as diaries, eclectic personal records of memory and experience.

Many of the motifs—the eggs, the chickens, the fabrics representative of Malaysia’s main ethnic groups, the diskettes—are familiar from Shukri’s previous work, but for the artist the significance of these images is inexhaustible and ever elusive. A thread running through Shukri’s work in this exhibition is precisely this multivalent eloquence of objects: a loosely sketched rabbit in one painting alludes to the rabbit-breeding business started by a friend of the artist, whereas the origami rabbit appearing in the same work is suggestive of Japan’s influence on Malaysia.

An interest in texture and textiles and the play of surfaces also underlies Shukri’s work. His canvases are layered with squares of fabric or cut-out numbers, reflecting, he says, the multi-layered nature of the world. Several of the paintings feature scraps of fabric machine-embroidered with bands of thread in subtle gradations of colour. The use of techniques such as these, from outside the strictly traditional artist’s repertoire, as well as the incorporation of images of found objects like coconut husks and flowers, spring from Shukri’s belief that art is embedded in everyday life. The everyday world revealed in Shukri’s work is one of vibrant, chaotic and constantly changing multiplicity. 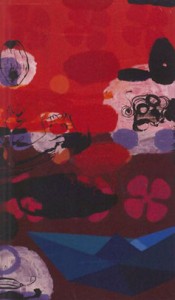 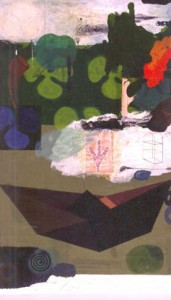