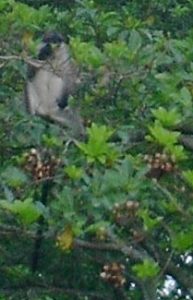 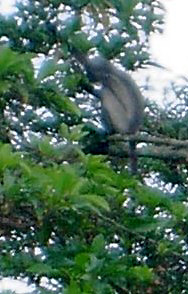 On the morning of 6th April, I took my coffee to my balcony where the sunscreen was down. Just as I went to raise it, I realised monkeys were in the tree immediately outside. They were Banded Langurs, Presbytis femoralis, and thanks to the screen I was able to collect my camera without them seeing me. They are extremely shy and flee at the slightest disturbance. I counted eight, but there could have been more, feeding on the seeds of Terminalia calamansanai, a tall pagoda-shaped tree heavily laden with fruit.

Soon after, I was called outside and noticed our youngest dog Santan carrying an animal that turned out to be a young civet. To be a naturalist and a dog lover is hard sometimes….

This particular specimen was a juvenile female, measuring 63 cm from tail end to ear tip, 9cm from nose to back of skull, with a 32cm long tail. 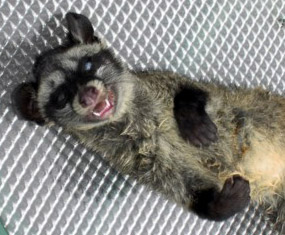 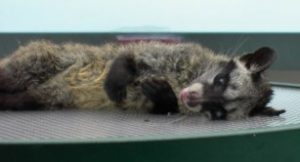 A widespread civet, varying from olive-grey to cream, with three dark stripes on back and additional dark spots on flanks, sometimes forming indistinct lines. Usually has a dark ‘mask’ highlighted by paler fur on forehead and behind cheeks, and sometimes with a pale spot below eye. Nocturnal and usually solitary, often seen on the ground, but feeds mainly in trees, where it eats fruits and animals. May be an important seed disperser of various forest tree species. Litter size three, born in a den in a hollow tree or under a boulder. Found from India through southern China, throughout mainland South-east Asia, Sumatra, Java and Borneo. Also occurs on the Philipines, Sulawesi and many eastern Indonesian islands where it may have been introduced.

From Mammals of South East Asia by Charles M. Francis.