Yesterday, our staff found this dying Barred Eagle Owl on the ground near the front compound.

“The barred eagle-owl (Bubo sumatranus), also called the Malay eagle-owl, is a species of owl in the family Strigidae. It is a member of the large genus Bubo which is distributed on most of the world’s continents. This relatively little-known species is found from the southern Malay Peninsula down a string of several of the larger southeast Asian islands to as far as Borneo.” – wikipedia

It looked like it ate a poisonous or poisoned animal and subsequently poisoned itself. We at Rimbun Dahan are against poisoning rodents (we choose to catch and humanely kill them) to avoid affecting their natural predators like the owl or other animals in the vicinity. It is also possible that this one accidentally ate a poisonous animal or snake.

We do have several Barred Eagle Owl nests in Rimbun Dahan but they seldom hatch more than a couple of chicks at one time and they can be quite frail and vulnerable creatures growing up.

“This species probably pairs for life. Barred eagle-owls seems to be very attached to a particular nesting site. If not disturbed, they will occupy the same territory for several years and, if one partner dies, the surviving mate will maintain the same territory with another owl parent. This species nests either in large tree cavities or, in Java and Sumatra, on top of the large fern Asplenium nidus.” – wikipedia

This beautiful female was buried yesterday after it died but we hope nothing tragic happens to its family. 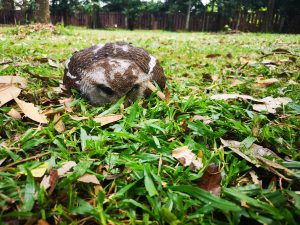 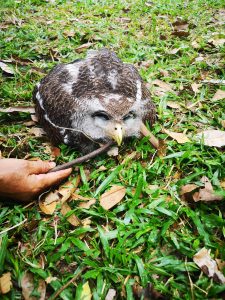 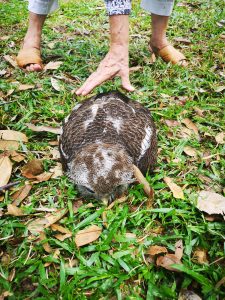 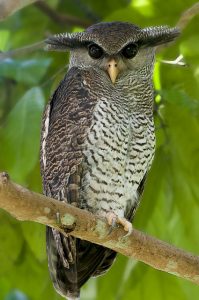 Photo of a healthy male owl from : http://parody.wikia.com/wiki/Barred_Eagle-Owl