Bruce Pashak is a multidisciplinary unrealist artist who uses imagery, text and technology to create abstracted anti-narratives that both affirm culturally-encoded associations and break free of these limitations. The images become an experience, a slippery personal tour through existentialism where the meaningful is unhinged and the meaningless finds its private value. He creates art forms as playgrounds for the imagination. Pashak calls them, “riddles that you might try to puzzle out but never need to solve”.

A masters graduate of the University of Calgary, Bruce Pashak continues his theoretical inquiries into the construction and dissemination of perception with a studio practice that includes combinations of painting, drawing, sculpture, mixed media and 3D lenticular technology. Pashak has had over 40 group and solo shows throughout Canada, the USA and Europe, including the Toronto Art Fair and most recently the Miami Art Fair, Dec 2015 with Back Gallery Project. He has an upcoming solo show in Nov, 2016 at Back Gallery Project in Vancouver, BC. Pashak was a professor in the Faculties of Fine Arts at three Canadian universities for a culmination of 16 years. His works are in private and corporate collections, including the University of Calgary, University of Lethbridge, Nickle Arts Museum, Vancouver General Hospital and the Art Hotel in Calgary. He is represented by Back Gallery Project in Vancouver, BC, Paul Kuhn Gallery in Calgary, AB, and Buckland Merrifield Gallery in Saint John, NB.

Pashak has recently formed the creative collaboration “PLACE” (Pashak Langdon Affirmative Common Experience) with textile artist Janet Langdon. Langdon studied serigraphy at Langara College and textile design at Capilano College and ran her own furniture upholstery business in Vancouver for 10 years. Her textile background brings the element of pattern design into the art works, aligning itself with the philosophy of the neopatternist theory of connections.

Bruce and Janet will be in residency at Rimbun Dahan from February to end of March 2016. For more information on Bruce’s work, you can visit his website. 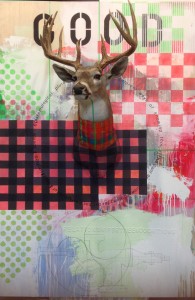 “Good” taxidermy head of a deer, mixed media painting on prepared board 48″ x 66″ 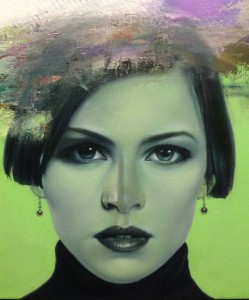 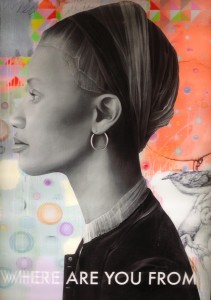