Dan Wollmering was born in St. Paul Minnesota, USA and immigrated to Australia in 1975. He is currently Senior Lecturer in the Department of Fine Arts and Sculpture Studio Coordinator, Faculty of Art and Design, Monash University.

Wollmering holds the following degrees: BA, MFA and PhD and has held 25 solo exhibitions and work included in over 40 group exhibitions internationally. Completing major public artworks in Australia, China and the USA, he was recently awarded the prestigious Contempora Sculpture Award for a socio/political work that part sculpture and part architecture. He has participated in overseas residencies including Malaysia, USA, and the Ninth Guilin International Sculpture Symposium in Southern China. A recipient of the Dame Elizabeth Murdoch Sculpture Award (CSA), he also received a Nomination Award for the Beijing Olympic Park Sculpture Design Competition. His work is represented in private, corporate and public collections including Regional Galleries and Universities in Victoria. The artist is represented by Flinders Lane Gallery, Melbourne and BMGArt, Adelaide.

He was one of the resident artists for Rimbun Dahan’s residency in 2009, and did a short residency in Hotel Penaga in 2014. 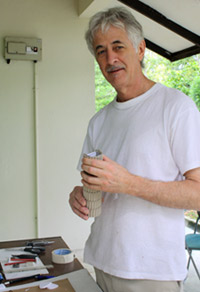 Lately, I have been trying to reduce the clutter that inundates our lives. Whether its junk mail, email spam or just ‘things’ that build up over time in the bottom kitchen drawer, the backyard shed or those items that suddenly make their appearance when rifling through the wardrobe, closet, bookshelves or unopened boxes − throwing out is satisfying.

As a sculptor, clutter is a constant companion in the studio. I find it difficult to depose of anything that inhabits a sense of wonder and aesthetic potential – compounded by the fact that someday, it could form the basis of a new sculpture.

For the last five years or so, much of my practice has followed suit; whereby, my aim is to reduce and crystallise the essence of the form and thus the concept. It follows in the tradition of Minimalism – perhaps less of the ‘hard edge’ and more of the ‘organic’ type.

In this manner, the work is abstract, sometimes familiar and sometimes ambiguous in their final character. Stable and unstable, expanding and contracting, the forms may also suggest references to a secret and mysterious life form; one of less perplexity and in keeping with the forces of a self-ordering system of modular construction and organic unity.

As a sculptor, I am forever cognisant of the rich and marvellous history of both eastern and western sculpture traditions, and to that end, my small gestures and contributions to an expanding and vibrant culture and arguably, one of the most challenging disciplines in the visual arts. 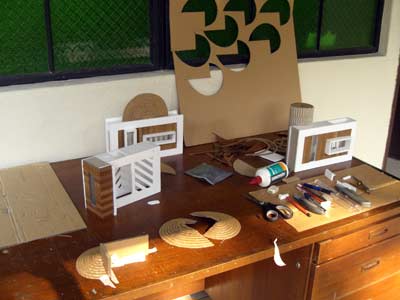 During his stay, Wollmering will be researching and documenting architectural forms from a variety of sources in George Town − as a catalyst for new abstract sculpture. Using the rich and diverse cultural make-up of Penang and the built-environment structures emanating from Malay, Chinese and Indian influences, Wollmering will be locating and referencing unique constructs as a conduit to new sculptural forms in his practice. Using mainly cardboard and low-tech construction methods, he will be creating hypothetical sculpture maquettes with a chosen few being made in steel by a local sculpture fabrication firm in Penang. These new works will then be exhibited in the Penaga Hotel and at Flinders Lane Gallery; a commercial gallery in Melbourne that he has been exhibiting with since 1990.