Over the last few weeks, four new bird species have been spotted in the garden at Rimbun Dahan.

The first, and the one with the closest encounter, is the Rufous Woodpecker (Celeus brachyurus), pictured below. This specimen was found dead on the driveway and covered with ants — an appropriate end for a bird that apparently excavates its nest cavities in the nests of tree ants, according to Jeyarajasingham and Pearson’s field guide to Malaysian birds. It is surprisingly difficult to correctly identify a dead bird. Although its plumage can be examined in detail, it lacks the posture, behaviour, and context so vital for identifying a bird in the wild. This particular species also has a very weak bill for a woodpecker, but its identity was at last given away by its zygodactylous feet (two toes to the front and two to the back, to allow it to grip vertically on tree bark) and its stiff stubby tail which it uses as a prop. 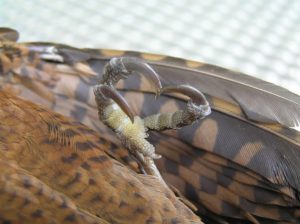 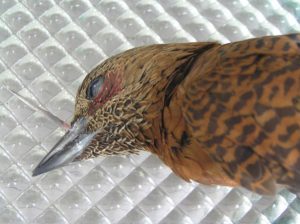 The Rufous Woodpecker is a resident at low elevations in the Indian subcontinent and southern China through South-East Asia to the Greater Sundas. It frequents forests, the forest edge, scrub, plantations and gardens, and is reportedly generally unobtrustive but very vocal.

The second new bird is Hodgson’s Hawk-Cuckoo (Cuculus fugax fugax). A single individual flew past my mother’s balcony and roosted quietly in the Congea creeper by the reflective pond. It was identified by the vertical stripes on its breast and the pale patch at the back of its head. According to J & P, this species is a resident from low elevations up to 300m, and may well be a winter migrant to the area.

The third new bird on our list is the Stripe-throated Bulbul (Pycnonotus finlaysoni), a pair of which was seen sitting in a kenanga tree on 3 Dec. It is a common resident, inhabiting principally hilly country, moving around in small parties.

The last new bird, and the most impressive, is the Purple Heron (Ardea purpurea), almost a meter tall. On walks in the garden accompanied by the dogs, my mother flushed this bird twice from the thick vegetation surrounding the upper pond, from which it went to roost in a nearby tree, extending and retracting its long neck. According to J & P, this is the only large heron occurring inland, and at low elevations it may be a resident or winter visitor. It is usually solitary, stalking its prey in shallow water.

The flush of new bird sightings at Rimbun Dahan may be caused by the seasonal arrival of winter migrants as well as several trees on site which have been fruiting vigorously. Last week the salang trees by the back driveway (Syzygium sp.) were producing copious amounts of small red fruit, snapped up by a large flock of presumably Philippine Glossy Starlings — see images below, (no larger image available). As the garden matures and more plant species are introduced, it also provides more cover and habitat for shyer species. 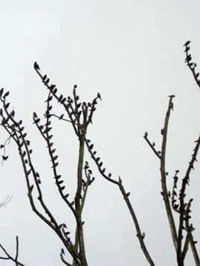