The 16th of December was a red-letter day for birdwatching at Rimbun Dahan — we got our first good photographs of a barred eagle-owl. Our first sighting of this impressive predator had occurred at dusk several days before, when the alarm screeches of drongos alerted us to its presence in a tree in the Taman Sari. The three drongos were swooping and calling around the owl, but none dared to get very close.

The owl was very tolerant of our staring, and even more so when we finally caught it on camera a few days later while disturbing its daytime nap. We were lucky enough to have our friends Akshay Sateesh and Brooke Resh visiting with their digital SLR to take some good shots.

The eagle-owl has been seen several times resting in the same ipoh tree, Antiaris toxicaria, beside the steps of the dance studio, gripping the branches with its enormous yellow feet. Once two individuals were observed sharing the same tree, enjoying a communal snooze. 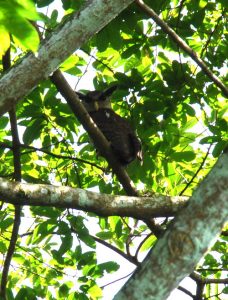 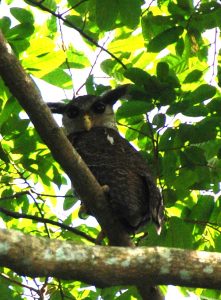 The barred eagle-owl using its flexible neck to look over its shoulder. 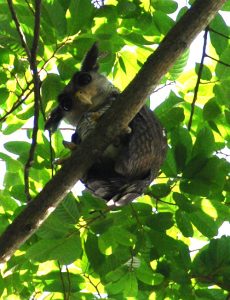 Strong yellow feet armed with formidable claws keep its grip on its perch. 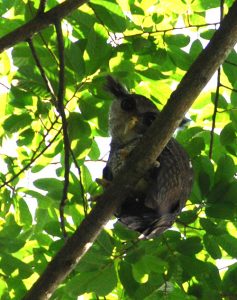 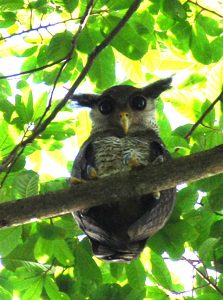 The barred eagle-owl does its best gremlin impression. 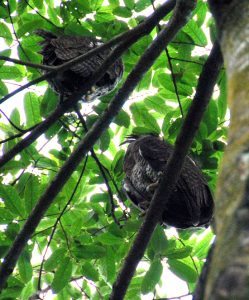 Fluffy butts! A pair of barred eagle-owls seen from below.

The barred eagle-owl (Bubo sumatranus) is found in Myanmar, Thailand, Malaysia, Indonesia and Brunei, and is now thought to be extinct in Singapore. It is a resident from low elevations up to 600m, and frequents forests, the forest edge, overgrown plantations and heavily wooded suburbs of towns and cities. Like other typical owls it is nocturnal, hunting from perches and flying low to locate prey after dusk. (Jeyarajasingam & Pearson, 1999)

The barred eagle-owl is the largest of several species of owl occasionally encountered at Rimbun Dahan. Other owls that have been seen include the barn owl (Tyto alba) and a smaller scops-owl. 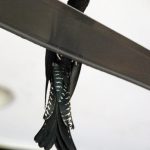 The drongo cuckoo showing the diagnostic white barrings on its vent and undertail coverts.

On the same day as the owl sighting, a drongo cuckoo flew into the main house at Rimbun Dahan and became disoriented and trapped in the television room. After barging about and crashing into the walls and ceiling, it finally managed to find its way out through an open window, and flew off apparently none the worse for wear.

The drongo cuckoo (Surniculus lugubris) is a glossy black bird with a down-curved bill and a forked tail. It is a resident, passage migrant and winter visitor to Malaysia, inhabiting the forest and the forest edge. Usually keeping to the canopy and the crowns of tall trees, it does not chase insects from an open perch in the manner of real drongos. A parasitic cuckoo, it has been known to lay its eggs in the nests of the Striped Tit-Babbler, leaving the foster parents to incubate the eggs and raise the young. (Jeyarajasingam & Pearson, 1999) 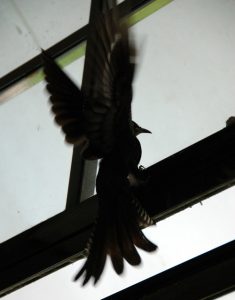 Silly as a drongo, bashing into the glass. 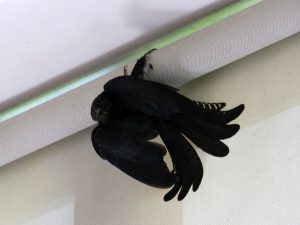 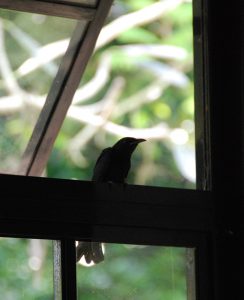 A brief rest at the open window, before flying off.