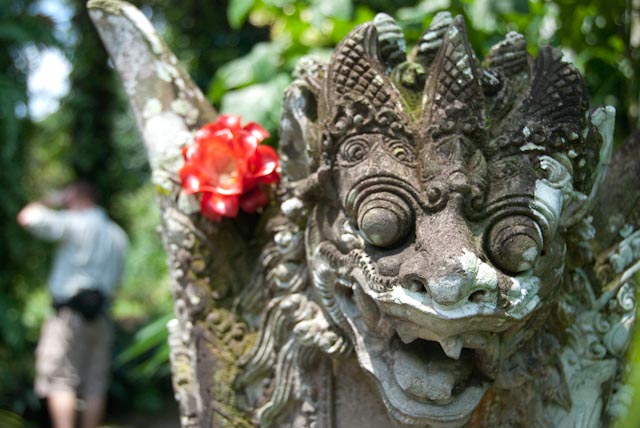 One of the Balinese lions guarding the entrance of the Taman Sari at Rimbun Dahan. Photo: Kiran Nagesh.

The 14-acre garden at Rimbun Dahan is an attempt to develop a Malaysian style of landscaping using indigenous planting material from South East Asia.

Specific areas are dedicated to forest trees, and a herb, spice and vegetable garden. Collections are ethno-botanic, palms, species orchids, medicinal and fragrant plants. Objectives include organic and sustainable cultivation and encouraging birds and other animals to use the garden.

The garden is open to the public when there is an exhibition on display.

Twenty years ago, the area around Rimbun Dahan was mostly kampung surrounded by orchards and small-scale rice farming. Rimbun Dahan itself was a rambutan and cempedak orchard, with other occasional cash crops like coffee and cocoa. As the area has been rapidly swallowed by urban sprawl, padi fields have given way to factories and orchards to denser residential plots.

We began redesigning the garden prior to our move to Rimbun Dahan in 1991, and the planting has since progressed in stages. Until recent years, the back has been somewhat neglected, with new planting near the tennis courts put in only in 2004. The rambutans and cempedaks that remain from the old orchard have been pruned back to provide space and light, and will eventually be removed. In the meantime they provide some shade and shelter for more tender forest species.

Some fruit trees do remain as testament to the area’s history. On entering the front gate, a durian orchard presents the first view of the garden. These are not bud-grafted varieties but species grown from seed — we believe that the anticipation of waiting for fruit and finally tasting it is something that the foregone taste of bud-grafted varieties like D-24 would deny. Many Malaysian visitors expect a garden to boast a few durian trees, and they are not disappointed, but the garden has a lot more to offer.

More about the development of the garden. 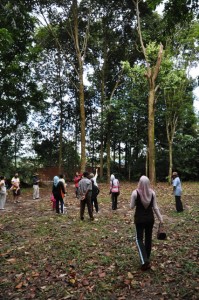 Angela Hijjas conducting a tour of the garden at Rimbun Dahan, during the Art for Nature 2010 exhibition.

When our family moved here, we realized that the garden had to have a strong concept that would guide its development over almost 15 acres. Taking the idea from my Australian background where indigenous gardens are common, and from my interests in nature and conservation, I decided to plant only Malaysian species, originally the Peninsula, but now the “Malesian” region of Tanah Air, or the entire archipelago.

By limiting the choice of plants in this way, the sense of place within the compound is more cohesive. These gardens are perhaps the only ones in Southeast Asia that focus on local biodiversity, plants and animals. Like Australia with its eucalypts, this garden is dominated by the forest species that make Malaysian landscapes unique.

Few Malaysian plants are chosen for gardens as they lack showy flowers; fragrance is more effective in advertising readiness for pollination when surrounded by dense forest growth. However, there is much to learn from planting indigenous species, as they can be used to provide everything needed to survive in the kampong and underlie everything in Malay culture; they have provided me with many fascinating insights into Malaysia.

More about planting indigenous gardens.
More about the sense of place in the landscape.

The tropical rainforest has formed the planting guide for Rimbun Dahan: lateral pruning and crowding force trees to grow up instead of out. Shade-tolerant species are planted beneath to block vistas and to shape the paths.

Around the house, the landscape design is heavily influenced by the traditional kampong style. Because plants and buildings do not make good companions, planting is kept well away from most of the structures. This has distinct benefits: branches do not fall on the roofs, there is better ventilation through the buildings and although shade during the day is minimal, the buildings have a chance to dry out rather than to accumulate damp, and fewer animals and mosquitoes enter the house. In addition, the garden is better viewed from the buildings when there is some separation. On the western side of the main house, a wall of tall trees 20 meters away shades the house in the afternoon from about 4pm.

The planting outside the fences reinforces the barrier to the road, and we hope that the choice of plants will encourage our neighbours’ interest in local species! Outside the front fence a row of Gardenia carinata, the Kedah gardenia, provides seasonal colourful flowers and fragrance. The under-planting of the shrubby perfumed kemuning, Murraya paniculata, reinforces a positive image for Malaysian species.

Non-indigenous plants that are already in the garden are being gradually phased out. The coconut palms outside the fence will remain, but others within the gardens are being progressively removed (to be made into delicious kari umbut kelapa) as they are not a feature of forest landscapes. They are also visually jarring to me when I look at the garden as an indigenous landscape: coconuts only grow where they have been planted by people. Other early planting indiscretions, like the Traveller’s ‘palms’ from Madagascar along the driveway, and the frangipani native to Mexico by the swimming pool, although both are popular choices among many tropical gardeners, will not be replaced when they die off.

The ponds in front of the house were originally excavated for fish farming but were reshaped ten years ago to look more natural. Fed by groundwater and a spring, they retard rainfall runoff rather than discharging rapidly onto neighbouring properties. The introduction of wetland species has been slow, but the ultimate objective is to establish as many varieties as possible. In the meantime, it does attract some birds and is home to the monitor lizards.

The garden attracts much wildlife, and it is an important objective to share it with as many animals and birds as possible. There are many bird species, both resident and migrant, and two species of monkey: the bold long-tailed macaques that are kept away from the house with sling-shots (they have never been hit, but the prospect is a good deterrent), and the much shyer banded langurs, or leaf monkeys. We have had rare visits from a solitary pig tailed macaque.

We used to see the occasional pangolin, and one a solitary landak, or porcupine. Many wild pigs used to visit the garden after rain, but now they are resident, hiding out in denser bush during the day and coming out to feed at night. There was supposedly a sighting of a mouse deer years ago, and occasionally we see snakes, one very large reticulated python lives near the spring and can be seen at night crossing our driveway. Biawak, or monitor lizards, used to be numerous, especially near the water, and grow quite large, but the Rimbun Dahan dog pack kill the little ones, and the occasional baby wild boar.

In choosing indigenous plants the hope is to encourage more wildlife. An important bird that has been sighted is the Black Hornbill, Anthracoceros malayanus, a solitary wide-ranging species that can apparently survive in fragmented forest areas. Eventually there will be enough old trees on site to provide nesting holes for such birds. We installed nesting boxes in some of the older trees, but so far they have been monopolized by squirrels or ants.

More about planting to attract wildlife.

Various open spaces have been designated in the garden which will be surrounded by walls of dense planting, either to display sculptures or to allow a better view of the trees. The most developed of these spaces is behind the artists’ studios where Ahmad Osni Peii’s yellow aluminium sculpture, ‘Sakinah’, is placed. The sloping lawn is used occasionally for evening performances of wayang kulit, and the tall ‘plong’ trees are planted in honour of the kampung in which Rimbun Dahan is located: Kampung Sungai Plong. (Most place names in Malaysia are named for the plants that predominated naturally, but there were no longer any plong trees in this kampong when we moved here, so seedlings were sourced from the Orang Asli in Kuang and planted here to reinforce that all important sense of place.)

Other noticeable sculptures in the garden are Matt Calvert‘s towers made from recycled glass. One of the ponds has also been used as the site for a water-based installation by Gary Proctor.

Taman Sari is the vegetable garden behind the house where the collection of herbs and spices, for cooking and medicinal use, is planted with fragrant species that provide the signature perfumes of Asia. The vegetable garden is organic, as is the rest of the Rimbun Dahan garden. The soil in this small area is burned earth, made from the clay left from the excavation of the main house, supplemented by organic matter, compost and chicken dung. Pesticides are not used: the close planting of compatible species is the only deterrent to insect attack. Difficult vegetables are not even attempted, so production tends to focus on plants that are easy to grow.

Visitors to the garden are free to break a leaf to release the fragrance of the plants, to taste the herbs, and enjoy the garden as it was intended. The original Taman Sari was built by the Sultan of Jogjakarta during the Dutch colonial era and provided inspiration for this successor. The choice of plants in the Taman Sari has many cultural overtones; for example the pinang palms, Areca catechu, at the entrance to the Taman Sari are reminiscent of the traditional ‘tapak sireh’, the betel nut box that was offered to honoured guests on arrival. In this garden they denote the same invitation to enter and enjoy.

More about the Taman Sari.
More about planting fragrant species.

Images below: Angela Hijjas conducting a tour of the garden at Rimbun Dahan, during the Art for Nature 2010 exhibition. 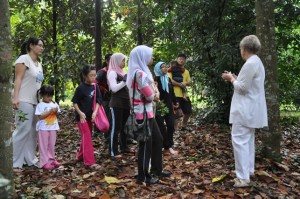 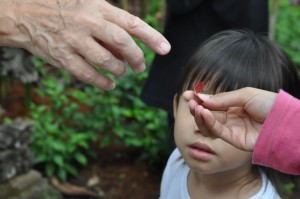 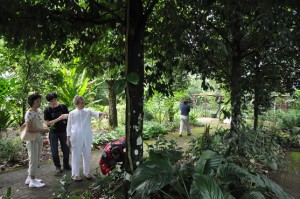 Gardening techniques vary. There is greater labour input within the Taman Sari, where species are tried out for hardiness before being planted further afield, and where vegetables and herbs require more attention. During dry periods this area is watered, often several times daily, with water pumped up from the ponds at the front of the house. Further away from the house, the landscape is less maintained. Prunings and sweepings are left in piles for white ants to break down, providing food for pangolins and refuges for small animals. Grassed pathways and spaces are mown only periodically. Rimbun Dahan employs one part-time and two full-time gardeners.