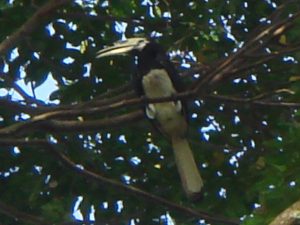 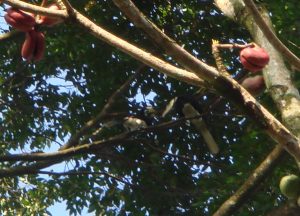 A small group of Oriental Pied Hornbills (Anthracoceros albirostris convexus) has recently been seen around Rimbun Dahan. Like all hornbills, they have large bills topped with a hollow casque. This species is resident up to 150m, where it frequents forests, the forest edge, plantations and beach scrub. Although it feeds mainly on insects and other small vertebrates, it gathers in groups to feed in fruiting trees, as it did at Rimbun Dahan to feed on the fruits of Kelompang jari (Sterculia foetida).

Oriental Pied Hornbills are a noisy species, whose flight consists of rapid flaps followed by short glides. It is also remarkably tame — large groups can often be observed by vacationers gathering in beach-side trees on Pulau Pangkor.

In other bird news, Rimbun Dahan usually hosts a group of Ashy Minivets (Pericrocotus divaricatus) during the northern winter. The first two arrived on 3rd November 08, and more the next day. I have been observing them easing because the tree they favour was struck by lightning a few months previously, and has little vegetation. Fortunately there are three other trees close by of the same species, Terminalia bellirica, so the group of winter migrants had alternatives.

On the morning of 29th January, I saw an unusually large number, at least 25, in the same tree, with others flitting around and feeding on insects in the other trees. Then a second flock of possibly 40 birds (from the corner of my eye, I initially I took them to be mynas) flew past. Most of those in my tree took off and followed them, heading northwest. I suspect I witnessed the departure for the north – what a moment!