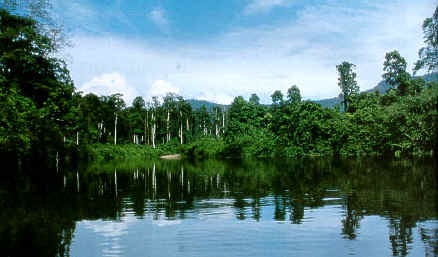 The early morning view from the jetty at Endau Rompin. The garden had to relate to this landscape.

To lay out a garden in the world’s oldest tropical rainforest is an exciting and daunting prospect. The Nature and Education Research Centre at Endau Rompin was opened in March by the Chief Minister of Johor, and the new facilities required some planting to set them off to their best.

Built by the Orang Asli of Kampong Peta, the centre is a haven far from city life and occupies a transitional space leading into the forest. The site for the Centre was chosen because it was long since cleared of the original forest by the Orang Asli for an orchard. The continuity of landscapes is important, so it was an important objective to at least keep the sense of this space being part of their culture. One of the hard decisions had fortunately been made by the Parks Director Encik Basir who had previously ordered that the vegetation between the Centre and the river be cleared. It was a good decision that forms the Centre’s sense of place by revealing the river.

As the building was finished some time ago, there was already some regeneration on site that gave clues about appropriate planting choices. The decision to restrict the range to plants from the park was an obvious one, and the Orang Asli had collected several species of gingers, melastomas, ferns, bananas and palms that were just waiting to be laid out. 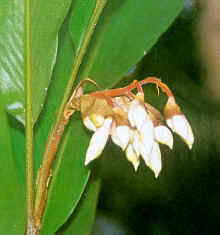 A pretty Alpinia that flourishes around the camp. We massed it to create a screen between the kitchen and the entrance. 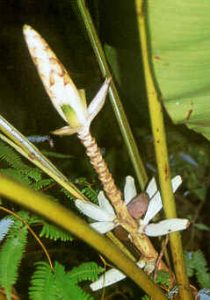 The white Musa gracilis is the smallest of Malaysia’s banana species and is rare outside the park, so we used it to provide a backdrop for the entrance signboard. 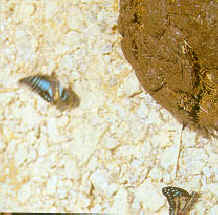 A surprise highlight of my visit was seeing fresh elephant droppings on the road outside the centre (where there had been nothing the day before) visited by a pair of male Rajah Brooke birdwing butterflies, Trogonoptera brookiana trogon.

We visited Kampong Peta to see what the Orang Asli planted around their homes, and found that the villagers had brought in many decorative species, pokok kampung, as distinct from pokok hutan. The yellow flowering Alamanda is popular, and things like Clerodendron, which I had always thought a forest species, but if it is, it is not from Endau, as the villagers were definite that it did not grow in their forest.

In the penghulu’s compound the white Melastoma takes pride of place. It is a rare find in the forest, but is now occasionally available from nurseries. Rarity, though, creates value and my idea to plant a whole bank of them seemed a bit excessive! 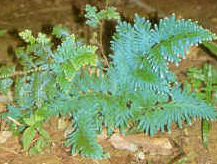 One of the prettiest plants is the peacock blue fern-like Selaginella wildenovii. It flourishes in the surrounding forest and had naturally established itself in the shade under the edges of the buildings. I decided to follow kampong practice and clear everything else well away from the structures, as maintenance of wooden buildings is a lot easier if they are not overhung or undermined by plants. The Selaginella is not invasive, and seems to cope with the dryer soil under the buildings, so planting more will create a blue field under the structures.

A feature that I wanted to highlight is the river rock walls of the main pavilion’s building platform. Rather than planting along the base that would conceal the rocks, we opted to plant the common pink Melastoma malabathricum densely along the top of the wall, outside the roof’s drip line and in full sun. When established they will display a mass of colour, and by highlighting this commonest roadside plant visitors will appreciate the potential of local plants in landscaping. 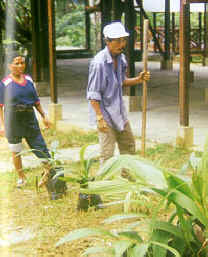 At the higher end of the same bank we planted Curculigo latifolia, where a few self sown individuals were thriving. Their pleated palm-like leaves are an interesting feature, and I wanted them massed together as densely as possible. The Orang Asli use this plant as a sweetener: the fruits are eaten and the residual sweetness flavours the next taste of something less palatable.

The rare white Melastoma was planted just opposite the pink variety, in full sun and wet soil beside the excavated pond to help conceal the damage done by digging. The plant likes full sun and a wet position, so it should do well and create a highlight.

An existing landscape plan nominated unspecified palms for the space between the pond and the dormitory. I considered transplanting five seedlings of the Livistona endauensis to line up with the building pillars. These palms are restricted to a sandstone ridge overlooking the centre and were first identified as a new species during the Malaysian Nature Society’s expedition into Endau Rompin in the ’80s. The Orang Asli didn’t think this was a problem, although sometimes palms are difficult to transplant and I wasn’t sure about removing these unique site-specific plants. In the end a more readily obtained Caryota or fish tail palm was substituted.

Another decision that related to the nature of space had to consider the large open area cleared of secondary forest and adjacent to the river view clearing. I considered a selection of indigenous trees, like Tristania that grows along the river banks upstream that would eventually be tall enough not to block the view, but decided against it. Not only would they need more shelter than the site provides, but it meant leap frogging the immediate past landscape of the Orang Asli dusun, a sense of which I wanted to preserve. There is lots of forest around but I wanted the landscape to acknowledge that this clearing and the forest have been in the care of the Orang Asli for centuries.

Several huge durian trees and a forest rambutan remain, the rambutan totally unlike the stunted bud grafted versions we see today. I suggested that the Orang Asli collect specimens of forest fruit trees, unusual things that they would relish, to plant in the space. Their immediate interest showed that it was the right choice. These trees will take years to fruit but they will form a major landscape feature and educational asset.

And there lies the difference between naturalist gardening and landscaping. Landscaping in the urban sense is about an instant transformation from one view to another, asserting the transition from one ownership to another, whereas gardening with a historical and natural perspective continues the landscape in a modified form where one makes do with what one has and improves upon it. The relentless search for novelty and fashion, not just in our clothes and home décor, but in the print we make on the land, means that we are removing ourselves further from our natural home, further from our natural landscape.