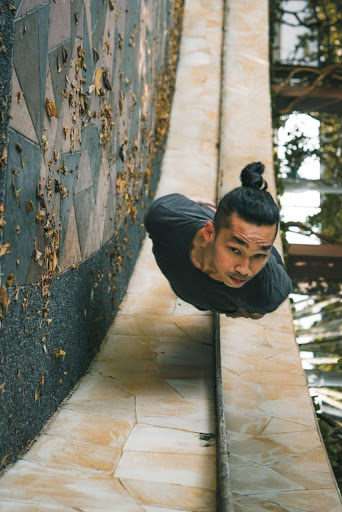 Wei-An has spent his whole life falling down; it’s a by-product of perpetually thinking he can do more than he actually can, whether that meant trying to spin on his head or backflip before he was ready, or learn how to snowboard on his own. And though he may not be the best at those activities, he’s become quite good at falling. He has, in fact, built his contemporary practice around his love-hate relationship with gravity, and the connections this relationship has with the psychological state of flow.

Out of this practice, Wei-An created The Art of Falling during his first residency at Rimbun Dahan in April 2018. This work has since been performed in Malaysia, Northern Ireland, and South Korea. This period also saw Wei-An begin working on translating the movement language of action sports – freeride mountain biking in particular – into a dance form, during a residency at Dance Nucleus in Singapore, with mentorship by Arco Renz (Belgium).

Currently, Wei-An is building on these two lines of inquiry, to develop a full-length solo that continues to delve into falling, freeriding, and the flow state. (Working title: A Reason for Falling)

He will be working on this solo at Rimbun Dahan throughout the month of July 2020.

Since mid-2017, when Wei-An started working as an independent artist, work has taken him to places such as South Korea, Canada, Australia, the United Kingdom, and most recently, Luxembourg.

On top of his choreographic and performance work, Wei-An organises an annual event called Paradigm Shift in Singapore. First held in 2017, the event brings together street and contemporary dancers in an experimental jam and competition, aimed at discovering creative opportunities that arise when these dance forms interact.

Note: A Reason for Falling is being co-produced by Dance Nucleus (Singapore).