Shortly after the introduction of the baby koi, all the mature koi and a number of the baby koi disappeared. At first we suspected infection. Ragged remains of koi were found near the swimming pool, suggesting that monitor lizards — of which we have many, and some very large — had been making free with the fishy remains. However, members of the staff at Rimbun Dahan said it was the work of musang (civet cats, or mongoose). Musang? we queried, but musang don’t swim! Oh yes, replied the staff knowingly, musang swim very well, and when there is food for them they call all their friends!

Mystified and doubtful, we held onto our first infection theory. A few days later, the staff clarified: No, we didn’t mean musang, we meant memerang. Otters? Even less likely.

Then early one morning Angela caught a glimpse of massive disturbance in the swimming pool, and then spotted two very large otters, one of them devouring the last of the koi. Characteristic spraints (otter droppings) have also been discovered on the swimming pool edge. The animals are so large that the Rimbun Dahan dogs have so far left them prudently alone. 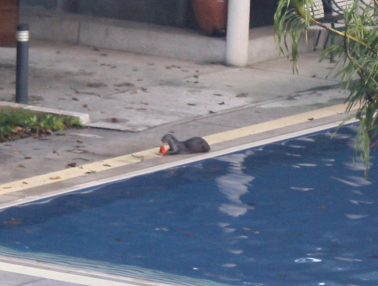 From our brief sighting, it is impossible to accurately define what species of otter these are. There are several species native to Peninsula Malaya, including the Eurasian otter (Lutra lutra), the endangered hairy-nosed otter (Lutra sumatrana), the smooth-coated otter (Lutrogale perspicillata) and the Oriental small-clawed otter (Aonyx cinerea). All are very similar, and some can only be distinguished by careful analysis of nose hairs and skull specimens.

No matter their species, the voracious animals have effectively cleaned out the fish population of the reflective pool. All the koi are now gone, and the tilapia population more than decimated. In order to cater to their enormous appetites, otters are required to have a huge territory, so it may be likely that our furry swimming visitors have come and gone… until we restock the pond for their dining pleasure.