Joey Chua (Singapore) and Mcebisi Bhayi (South Africa) were resident choreographers at Rimbun Dahan in 2008. Mcebisi and Joey’s collaboration was the first recorded instance ever of a female Asian choreographer working with a male African choreographer to produce a single work.

Mcebisi, a South African Xhosa man who swears by his customs, and Joey, a Singaporean woman who can barely speak her Chinese dialect Hakka, decided to start a dialogue. After months of letter writing and intimate sharing of childhood memories, their exchange shifts to the present as they come face-to-face, finding both common ground and contrasts in each other’s dance background, personality and physicality. In tracing the minds and bodies of one another, they hope a new dance vocabulary emerges on their creative journey together.

The dance collaboration between Joey Chua and Mcebisi Bhayi continues to evolve as a work-in-progress showing in KL followed with appearances in Hong Kong and at Singapore Esplanade’s dan:s festival. The finished work will premiere at the FNB Dance Umbrella 2009, a major dance festival in South Africa. Chua, one of Singapore’s rising young dancer-choreographers, has been involved in many collaborative projects that have taken her to festivals around the world. Bhayi is a dancer, choreographer and educator who has been nominated as Most Promising Male Dancer in Contemporary Style at the FNB Dance Umbrella 2001.

The images below and the video above show Mcebisi and Joey improvising in the studio at Rimbun Dahan. 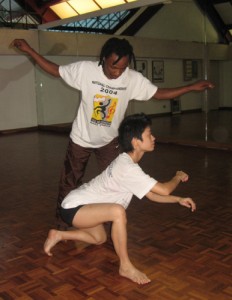 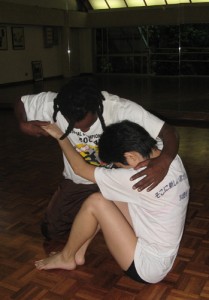 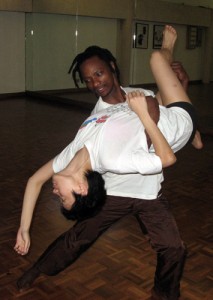 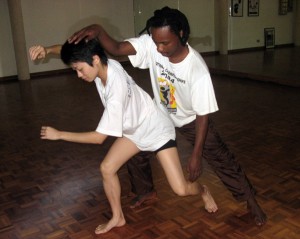