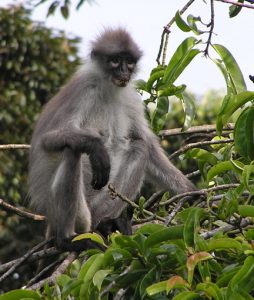 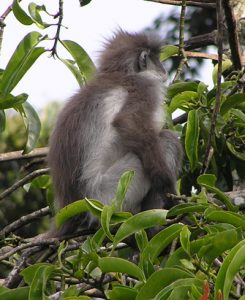 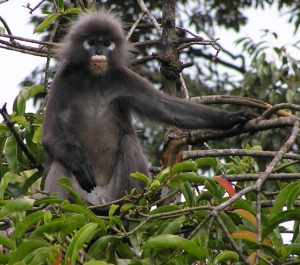 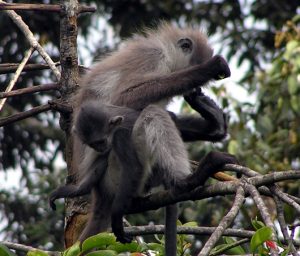 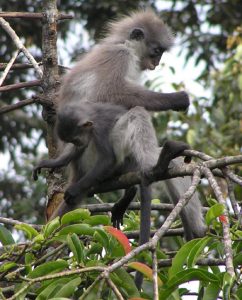 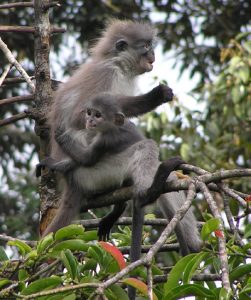 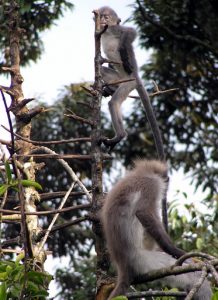 A new camera with a zoom lens brings us Rimbun Dahan’s very own peanut gallery – a selection of intimate portraits of the local troupe of leaf monkeys.

Burma and Thailand to Malaya, widespread in forest at all elevations. Coloration is rather variable, most individuals have back and shoulders grey or dark grey, legs and the crest of longhairs on top of the head paler grey, the breast and belly usually appear pale grey or whitish, with a sharp line of demarcation between this shade and the darker back. Distinguishing feature on adults is the bold white interrupted rings around the eyes and a white patch over the mouth, including both lips. In new-born young the fur is pale orange or reddish buff, and the skin of the face entirely pink.

Arboreal in groups of 5 to 20 (the group at Rimbun Dahan is estimated at about 12 adults). Home range of a group is 5 to 17 hectares. When traveling troops usually move in extended line, each monkey following the same general route through the treetops running quadripedally along branches, climbing creepers, or leaping from one tree across to the canopy of the next.

At rest, the long tail hangs straight down and is often conspicuous when the monkeys’s body is hidden. In motion the tail although not prehensile is important in maintaining balance. Natural diet consists of young leaves and shoots; these may be plucked by hand (see image of mother with clasped fist holding leaf), but more often the monkey pulls down leafy branches and browses directly on the terminal shoots (hence the defoliation of the assam gelugor trees at Rimbun Dahan). Oestrus every three weeks, gestation 20 weeks.

The Wild Mammals of Malaya and Singapore,
by Lord Medway, Oxford University Press, 1969.