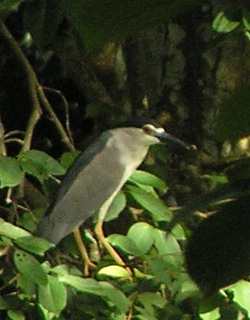 On 23 June, a Black-Crowned Night-Heron, Nycticorax nycticorax, was seen roosting over the pond at Rimbun Dahan.

According to A Field Guide to the Birds of West Malaysia and Singapore (Oxford), by Allen Jeyarajasingam and Alan Pearson, the night-heron inhabits mangroves, rice fields, inland freshwater swamps. It is largely nocturnal but also active by day. It roosts and breeds colonially in mangroves but feeds at night mostly in freshwater habitats and also on mudflats at low tide. At dusk, night herons circle their roost in noisy flocks and flies in V-formations to feeding grounds, returning at dawn. During the breeding season, these birds are very active during day, collecting nest material and indulging in a variety of aerial displays.