Our staff found some lumps of kemian hitam, a type of aromatic resin that came from the rotting wood of Canarium littorale or kedondong bulan which had been struck by lightning a while ago. Half of the tree was killed and rotting on the ground. 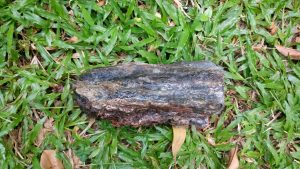 Kemian Hitam from the rotting wood of a C. littorale

The resin has a very nice fragrance when burned. According to the Internet it is also associated with occult practices: it may be used to summon “makhluk halus alam bawahan, Jin Tanah, Jin Pokok, Jin Batu dan yang sebangsa dengannya.” A comment on our facebook post claims that kemian hitam is used in smoking and cleaning woven textile such as songket, limar and kelingkam by suspending the cloth on a rack of netting and smoking kemian beneath it. This method is thought to kill bugs that may feed on the textile as well as get rid of mold.