Le Thua Tien has a diverse art practice that includes paintings, installation, experimentation with sculpture and community based art projects. The direction of Tien’s paintings changed from figurative to abstract when he arrived at the Rijks Academy in Amsterdam in 1995. Some of his most recent works are mixed media and lacquer and can be considered symbolic of his subjects. He is one of Vietnam’s few artists who address the American War in his works. His work also tends to be more conceptual than many other Vietnamese artists. His work has been displayed in the United States, Thailand, the Netherlands, France, Germany, Venezuela, Japan, and Australia. Le Thua Tien lectured at the Fine Arts University in Hue, Vietnam, from 1989 to 2008. He now lives and works in Hue.

The Haiku Path Project in Rimbun Dahan is a sculpture / installation project. It contains a series of selected haiku poems, engraved onto granite slabs, arranged along the walking paths of Rimbun Dahan’s garden. The granite used in this project is recycled material. By laying it back to the ground; with time, the slabs will embed themselves into the forest.

The project aims to:

The first stage of the project, created in February 2013, features 5 haiku poems written by Matsuo Basho (1644-1694) [with English translation by R. H. Blyth] and two poems by Mike Ladd (b.1959), a former Rimbun Dahan artist in residence. Tien considers The Haiku Path Project an ongoing project and plans to add more poems to the compound. 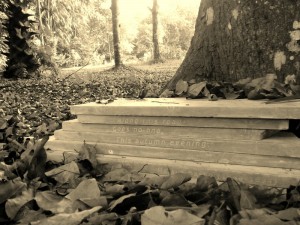 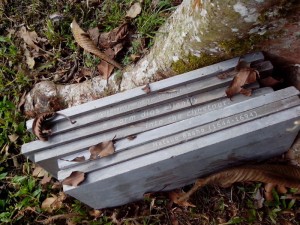 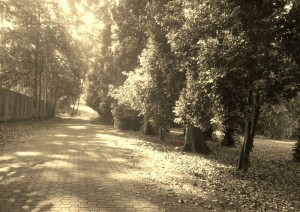 The location of the first Basho haiku installation, along the driveway at Rimbun Dahan. 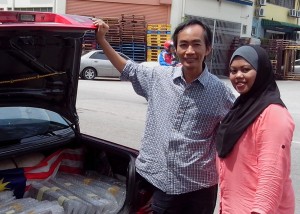 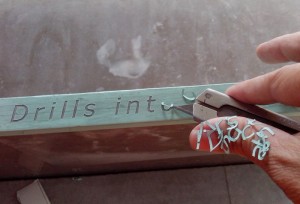 Le Thua Tien working with stickers to design the engravings

Haiku (Hi-koo) is a traditional Japanese verse form, notable for its compression and suggestiveness. In the three lines totalling seventeen syllables measuring 5-7-5, a great haiku presents, through imaginary drawn from intensely careful observation, a web of associated ideas (renso) requiring an active mind on the part of the listener. The form emerged during the 16th century and was developed by the poet Matsuo Basho (1644-1694) into the refined medium of Buddhist and Taoist symbolism.