The only good Acacia… 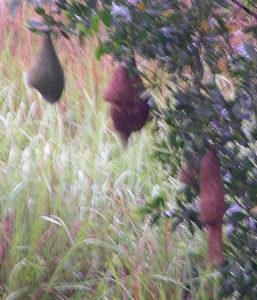 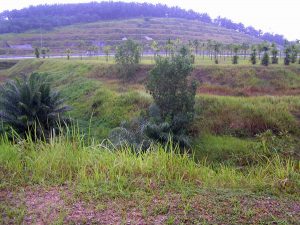 … is a dead Acacia? Not this time…. In the middle of a traffic interchange on the Guthrie Corridor just near Rimbun Dahan, a solitary Acacia is hosting about eight Baya Weaver nests (Ploceus philippinus). In a completely open space, surrounded by what Guthrie considers landscaping (a sparse sprinkling of non-indigenous palms) is one Acacia draped and decorated with these ingenious nests.

On showing it to my grandchildren, I speculated why they had chosen this site rather than elsewhere: it’s out in the open and predators are readily seen, there’s safety in numbers, they are surrounded by open land where grasses can grow, and that’s what they feed upon. According to Allen Jeyarajasingam they frequently nest in association with nesting red ants and hornets, and the characteristic nest is a neatly woven flask shaped structure with a long downward tubular entrance, suspended from branches. We were too far to see the birds, and it was raining, hence the bad photo quality.

Rather than cropping this photo, and in view of our coming exhibition entitled Tanah Air, I let it stand as a record of our common landscape: oil palms forever in the background (it used to be forest), cleared and cut land where nothing can grow except for the admirable lalang and Acacia, an invasive species from Australia, and highways. Welcome to the new Malaysia.