This specimen of Python reticulatus, about 3m long, was caught in the hen house, along with two dead chickens, one of which had been eaten. In an attempt to escape, the python then regurgitated the chicken it had eaten. Some time later, the python was still in the henhouse, so Rimbun Dahan staff transferred it to a gunny sack and released it outside the property near a small stream. 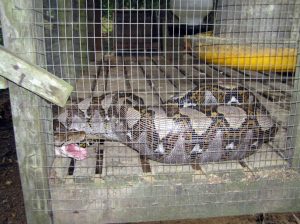 The python, surprised in the henhouse. 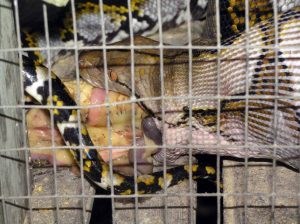 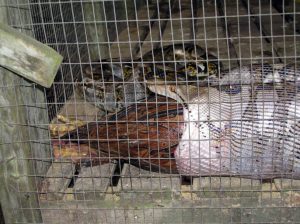 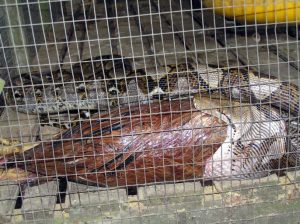 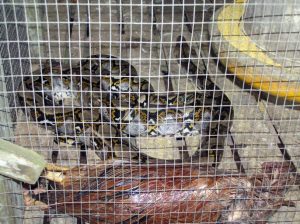 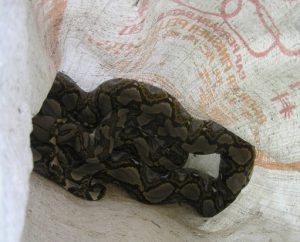 The python in a gunny sack. 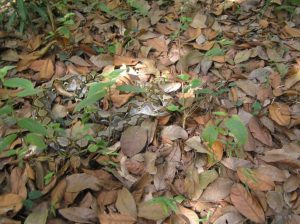 In its natural habitat, the python is perfectly camouflaged. 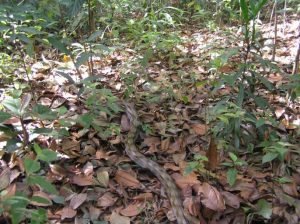 The python bolts for freedom.

This is only one of many such encounters with pythons at Rimbun Dahan. Two years ago, a large python was found trapped in the well and helped to escape; see Nature Notes August 2006. Other reptiles observed at Rimbun Dahan include the monitor lizard and other snakes including rat snakes, paradise tree snakes and cobras.

The Reticulated python is known to be the longest of all snakes, attaining a miximum length of 15 m. Its normal prey is warm blooded animals from chickens, pigs, goats and monkeys to small deer. Prey is swallowed whole, the snake’s jaws are not rigidly joined and thus can be stretched wide to acommodate bulky food. This python is normally found in forest, especially close to water, it can also be found in urban settlements. Small pythons can easily be captured and tamed, but adults are dangerous as they can deliver vicious bites, and their powerful coils may be too much for a man to handle. The female python lays from 20 to 50 eggs, rarely up to 100. The eggs adhere together in a mass, which the femail coils around and incubates for a period of betweeen 75 and 90 days. Baby pythons look similar to adults and measure about 60 cm in length.