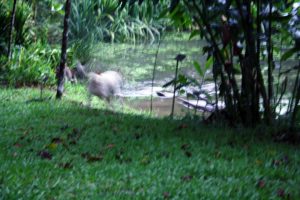 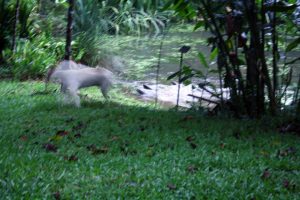 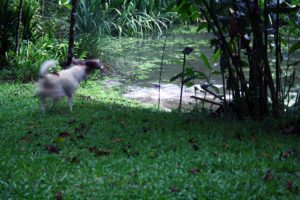 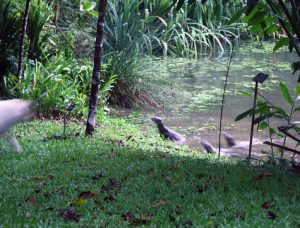 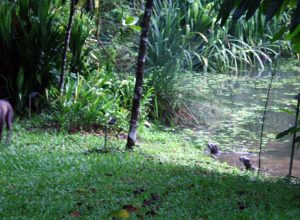 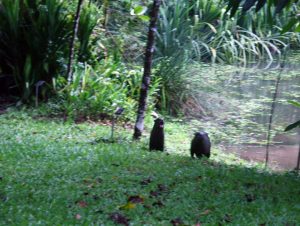 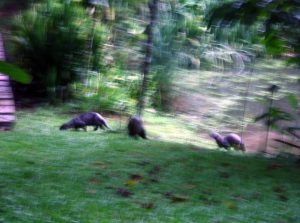 The otters are back, and they are bristling! Having been our occasional visitors for a few months, we are no longer surprised by the odd spraint by the side of the swimming pool, but so far direct contact between humans and otters at Rimbun Dahan has been rare. This morning Angela Hijjas had a thrilling encounter with our fish-eating friends:

“I woke with the azan this morning to hear desultory barking by Samson and Santan… I went out because it sounded a bit odd, and when I turned on the loggia light a big splash near the blue pots indicated something large in the water. It had to be an otter. I turned off the light and retreated with dogs in the house.

“I watched for the next 45 minutes and then gave up, but it was starting to get light and from upstairs I could see waves in the lower pond, so I got my camera and went down even though it was still dark. The dogs didn’t see me as I was behind the hedge, and I could see there were about 6 of the otters cruising around in formation. I think they hunt together by herding the fish into a corner and then attacking. They were catching fish but I didn’t see any eating.

“It quietened down, and I realised they were in the upper pond so I followed via the edging of the reflective pond and of course Santan and Samson saw me and followed. I thought the game would be up if the dogs got wind of the otters, but no indeed!

“The dogs went down to the divide between the ponds and the otters attacked! Four of them, heads rearing out of the water simultaneously towards the dogs, and then advancing out of the pond and onto the grass! Of course my faithful dogs retreated and were going to go home, but it would have been a huge loss of face with me there to protect. I had my SLR camera, and was clicking continuously although not with the camera to my eye, so most of the shots were out of focus but I was so close I had to get something, and I felt that if the noise of the camera continued they wouldn’t bother with me, but eventually when I was thinking I should retreat they realised I was there and disappeared.

“What an exciting morning!”

A group of otters is variously called a family, a bevy, a lodge or a romp, or, when in the water, a raft. At Rimbun Dahan, we might call ours an attack.