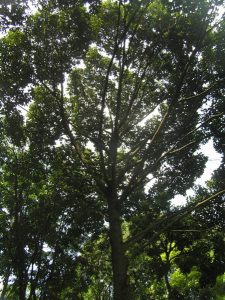 The canopy of Shorea materialis. 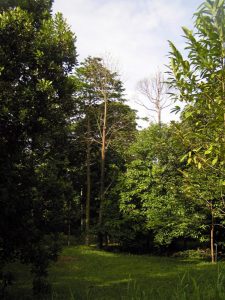 The damage done by lightning among tall trees. 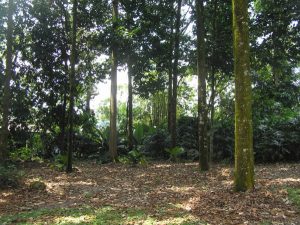 Shorea materialis planted in a group.

The main objective in the planting programme at Rimbun Dahan is to develop the highest canopy possible, not always easy when trees tend to branch out as soon as they reach clear light. To encourage monopodial structure for as long as possible, we prune side branches and force the trees up by dense planting. Inevitably this has made them the tallest structures in the neighbourhood, apart from the DiGi tower on an adjacent block, and they are vulnerable to lightening. Two trees were lost on different occasions, a durian on the right-hand side and a Sterculia (fortunately not an indigenous species). We lose four or five trees a year, but then we have an open space where we can plant something else, in a ready-made ‘tube’ for rapid vertical growth.

The notes on Shorea sumatrana last month generated an interesting response on its rapid growth, spurring me on to measure more of Rimbun Dahan’s dipterocarps, although not all of them have a definite planting date. The following species have been measured this month, and the dates of planting noted where they are known. Measurements are in inches GBH, or girth at breast height.

1992, Shorea materialis, balau pasir, 10 saplings were planted in a sandy area of the garden and now measure between 18″ and 58″. There is no apparent reason why some have done better than others, but it seems where there is under planting and the trees are perhaps less disturbed they do better, but this is not always the case… the biggest of them all is out in the open.

A Terminalia foetida planted in the same vicinity at the same time measures 55″.

Beside the dance studio there are three Dipterocarpus dyeri trees, planting dates unknown, and they now measure 46″, 51″ and 52.5″. There is one 44″ Hopea nutans in the same area.

Three Dipterocarpus baudii planted in 1990, now measure 34″, 36.5″ and 28″. The last fell over at some point and was tied up to other trees for support, so that must have affected growth.

The row of Hopea odorata planted along the front drive in 1990 vary in size, the biggest being a princely 68″, but the others vary leading me to think that some seedlings are less successful than others.

The following are not dipterocarps, but have done well: