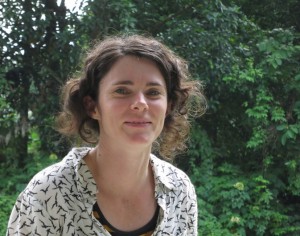 Bec Stevens undertook a three month residency at Rimbun Dahan in 2012, in association with Asialink. Bec is a Hobart-based visual artist whose work is underpinned by studies in Architecture and Horticulture. She graduated from the University of Tasmania’s: School of Art in 2003 and School of Architecture and Design in 1999.

Her practice is site-responsive and inter-disciplinary, using a range of mediums as tools to respond to the social and historical nuances of constructed environments. More specifically she is interested in, and responds to public spaces that are left-over, in-between states or unplanned, often resulting in works that reflect on processes of development or entropy.

Bec frequently uses plant material within works, and during her time at Rimbun Dahan she intends to respond directly to the garden of indigenous Southeast Asian species. She is interested in the garden as an island of biodiversity in the context of the surrounding area of Kuala Lumpur, particularly in light of the rare and endangered species it holds; and in the social customs and specific relationships to botanic species. Alongside this she is interested in the rates of change, growth and decay in the region, in terms of the inherent maintenance required for living in a place that sits in close proximity to the equator, and she intends to use this as impetus for developing work.

Bec Stevens recent projects and exhibitions include: ‘STOP. REST. PLAY.’ (2011) commissioned as an activity of the CWA CBD Branch; ‘Lookout’ at the Tasmanian Museum and Art Gallery (2010) and ‘Canopy’ (2008) commissioned for the Royal Tasmanian Botanical Gardens. She has received funding from Arts Tasmania for numerous projects and in 2009 was the recipient of a New Work Grant through the Australia Council for the Arts. In 2010 she completed a Studio Residency at Contemporary Art Spaces Tasmania and she is currently the recipient of the Curatorial Mentorship through Contemporary Art Spaces Tasmania. She is an active member of the CWA CBD Branch, see www.cwa-cbdbranch.com.