Renee Kraal was the Malaysian artist of the year-long Malaysia-Australia Visual Arts Residency at Rimbun Dahan in 1996.

She studied at the St Martin’s School of Art in London, as well as studying pottery at Stanhope Institude and Campden Arts Centre. Her work includes drawing, painting and batik, and has been exhibited in Germany and Australia as well as in Malaysia. In 2005, she was featured as one of three women artists in an exhibition at NN Gallery in Kuala Lumpur. 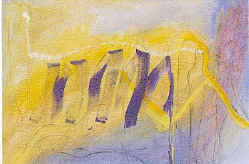 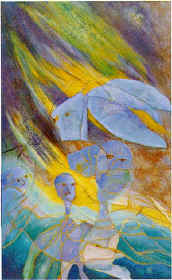 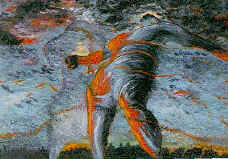 Appearance and disappearance.  Form and de-form.  Structure and ‘dis-structure’.  Sight and insight.  The paintings of Renee Kraal seem to inhabit these realms of tensions.  The realm between Being and Nothingness.  Meanings obtain only in the dialectical relationships between states of consciousness.  An art that thrives on the awareness of the necessity of forms while simultaneously intent on the possibilities of formlessness.  Conscious formlessness and formless consciousness.

This mode of artistic creation, of course, has always been important in modernist painting traditions, given the preoccupation with intuition, the subconscious, the spiritual, dreams and what not, of early European modernists, and also in the covert ‘action’ and ‘freedom’ of American Abstract Expressionists.  In Symbolism, Expressionism, Surrealism. or even Impressionism with its interest in the effects of transitory light on the perception of forms, at various times either extreme dominates artistic production, giving free rein either to conscious disorder or unconscious order.  At other times, ambivalence takes over, or as could be appreciated in Kraal’s works, a sense of emergence and submergence of both seems to rule the life in flux of the subject matter.

It would not do, however, to identify her works with just one of the modernist labels, because interestingly, the works are at once symbolic, expressionistic, surrealistic, and impressionistic, and more.  The works do not convey the artist’s message as much as the ‘message’ conveys the artist.  It is not difficult to imagine that the artist is quite essentially immersed in the works, journeying freely within the terrains of the subconscious.  The paintings then become intriguing maps of these journeys, topographies of Freudian signs and Jungian de-signs.

Whatever title is affixed to a painting, whether it be Joy, Energy, Vibrations, Mental/Emotional Physical Bodies, Levitation,Mask, Nature or even Secret Music of Plants, they are all Primal Screams of sorts.  The forms and colours do not merely describe the essential external world, but express profoundly an inner pathos alluding to an aesthetic of pathology that is neither pathetic nor pathological.  On the contrary, the allusion reminds us of the inscrutable aspects of human life and the universe.  When Kraal says that ‘it’s troublesome to be human’, it is not just a whimsical platitude.  From looking at her works it is the ever-shifting boundaries between visible reality and invisible sensibility, the fluid tension of, and in life, to which she refers.

Kraal’s maps of transitions aptly appropriate the Greenbergian modernist idiom with a twist.  The flatness that predominates Greenberg’s theory of modernist painting while offering aesthetic meaning to Kraal’s work does not overpower the artist’s insights about life.  Kraal is not limited by total subservience to formalistic concerns as is demanded from the Greenbergian reduction of painting to painting.  She does not shy away from revealing allusions to pictorial recession.  Nor does she intentionally restrict her painterly explorations to considerations of properties of painting as art, as propounded by Greenberg. In fact, just as they inhabit the realms of tension and transition, Kraal’s paintings derive from and defy the Greenbergian canon.  They operate as painting as art, and as windows to the outer and inner worlds.  The medium does not just define her paintings as art, it is also the vehicle in her journeys to somewhere and nowhere, between the conscious and the unconscious. 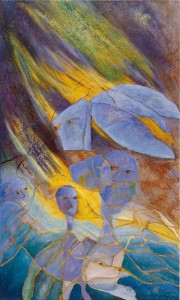 In the context of Malaysian art, Kraal’s paintings show affinity with many Malaysian artists, in as much as many Malaysian artists’ mode of creation exhibit a tendency to explore the aesthetic possibilities of the indefiniteness of forms and contents.  Sometimes the pictorial context is reminiscent of unlocatable landscapes, as in Latiff Mohidin’s Pago-Pago paintings or Syed Ahmad Jamals’ Gunung Ledang.  Kraal’s enigmatic figures and forms are often depicted against and within a landscape context, projecting the inner psychological and spiritual worlds into the more physical outer world, or vice versa, a mode of artistic expression also seen in the abstract or abstracted landscapes populated by barely perceptible bare torsos painted by Yeoh Jin Leng, Joseph Tan and Ibrahim Hussein.  But more clearly, Kraal’s painting show closer affinity with the worlds of Ali Mabuha and the much younger Anna Chin, especially in the projection of psychological states into the physical landscapes. Perhaps because of this, the artists’ worlds cannot just be described as inaccessible by their being highly personal or that the artists are not concerned about the external and the real social world.  Perhaps, our appreciation of this kind of work would be all the more meaningful if we regard the indeterminable landscapes as metaphors of commentary about society and the environment.  With the works of Kraal, our contextual appreciation of them in this regard could take an existential view point. The individual could be seen as having to exist and struggle within the dialectical relationship between personal hopes and environmental determination.  He or she has to realise the reality of this existence that does not always offer a clear demarcation between concrete graspable reality and the no less concrete but ephemeral unconscious.  Kraal’s works map out this realm of transition.  In this she shows quite an exceptional level of artistic sincerity and conviction.  Surely in these times of unbridled commodification of artistic productions, such a quality ranks high as a criterion for critical regard.