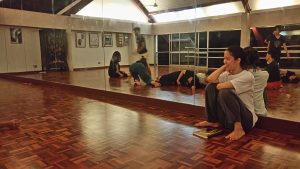 The 14 participants were chosen through an open call process, with applications submitted to a panel including committee members of MyDance Alliance and World Dance Alliance Asia-Pacific.

The participants lived, worked and explored together in the arts community of Rimbun Dahan for 9 days, with guidance from our international facilitator, Japanese choreographer Akiko Kitamura.

The program consisted of 7 work days in the studio, with choreographic tasks assigned by Akiko Kitamura involving working in duets. The morning sessions consisted of workshops led by the participants themselves, to introduce their own cultural backgrounds and creative practices to their peers.

The Choreolab concluded with an informal showing of the duet works that the participants had made, to a small audience in the studio at Rimbun Dahan. [Photos from the showing below by Huneid Tyeb.]

Akiko Kitamura was born in 1970 in Tokyo. She learned ballet dance and street dance in her youth, studied dance theory at Waseda University and began to build a professional career as a choreographer in show business while still in her teens. She choreographed many pieces for commercial films, fashion shows and plays. In 1994, she founded her own company Leni-Basso. In 1995-1996, she stayed in Germany for a year as a resident artist.

In 2001 she was invited to the Bates Dance Festival and created Finks, one of her best known works, performed more than 60 times worldwide. Ghostly Round (2005), choreographed for In Transit organised by Haus der Kulturen der Welt (Berlin), is another of her signature works which has toured internationally. Akiko Kitamura has made many works for international companies, commissions and collaborations such as for American Dance Festival, Group Motion Dance Company in Philadelphia, ACE Dance and Music of Birmingham, and avant-garde rock group Art Zoyd in France.

Akiko started to learn pencak silat in 2004 according to a strong interest in the body techniques of South East Asia, and in 2010 she came to Indonesia to research dance, music and martial arts more deeply. In 2011, she started to collaborate with Indonesian artists including choreographer/dancer Martinus Miroto, Yudi Ahmad Tajudin (Teater Garasi), dancer Rianto, musicians Kill the DJ (Jogja Hip Hop Foundation), Slamet Gundono, and Endah Laras, and a team of Japanese artists to create the To Belong Series, such as To Belong-cyclonicdream- (2013) and To Belong/Suwung (2014). The work explores how two cultures meet, and connects the old world to the contemporary using video, music and dance. It also aims to discover the new generation of the Asian Body: the repository of the traditional and the contemporary worlds.

In 2015, Akiko was an Asian Cultural Council Fellow and a Saison Foundation Fellow. Since 2001 Akiko Kitamura has taught at Shinshu University, Nagano, as associate professor of the Faculty of Arts.

The Southeast Asian Choreolab 2016 was a joint project by