Jel Suarez (b. 1990) is a visual artist born and based in Manila, Philippines. Her craft is centered on the practice of collage, in which mostly old master works of art and past exhibitions – sourced from old books and catalogues – are intricately cut in an unconscious process. Her fascination with the body of draperies and structures, allows her to form, paint, and sculpt them in her attempt to produce ideas, narratives, dimensions, and landscapes.

The act of manipulating the archives is her way of understanding reproduced images – further distorting its original sense, and fragmenting them into multiple meanings.

Suarez has been exhibiting her works since 2014, with solo exhibitions at Vinyl On Vinyl Gallery, and several group shows under Artinformal Gallery, Underground Gallery, VOV Gallery, Blanc Gallery, etc. She has also participated in art fairs here in Manila, Hong Kong, Taiwan, and Singapore.

During the first month of my artist residency, I plan to finish my pieces for an upcoming exhibition this June at Underground Gallery (Manila). The themes and focus of my work have shifted since last year’s proposal project – triggered by the current madness and repercussions of the Philippine government’s war on drugs, I seek to explore and intersect a narrative of its influence on our country’s social fabric. I want to develop new works which will look at how it has possibly structured the society’s landscape and perception of power, social class, and human life.

Rimbun Dahan’s living environment is ideal for cathartic work. I think that the cultural and creative dialogue between me and its resident artists will help strengthen my practice and extend the narrative for this project. 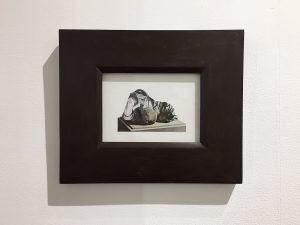 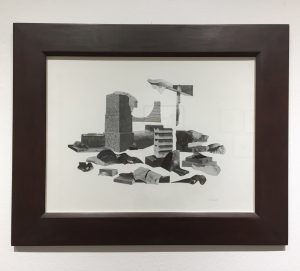 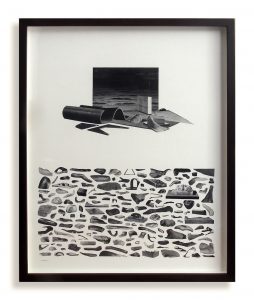 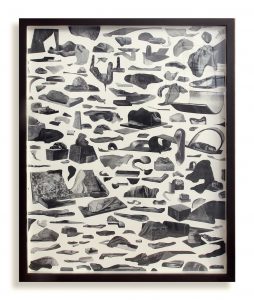 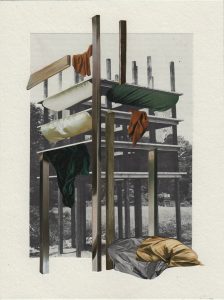 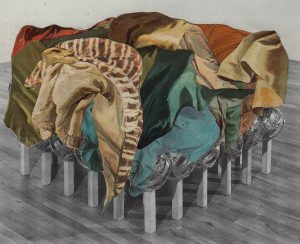 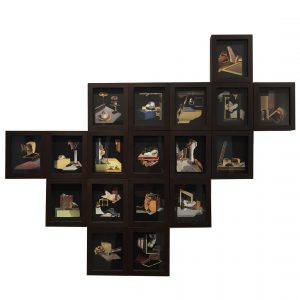 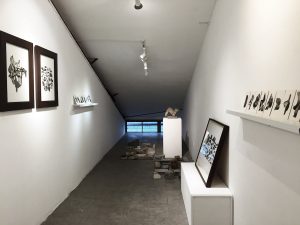 Veronika Neukirch is a German artist born in 1986 in Duesseldorf. She completed her Art & Design Foundation in 2010 and graduated with a BA (Honours) Fine Art from Central Saint Martins in 2013. She has been based in Kuala Lumpur since 2014 and has been exhibiting across Malaysia as well as abroad.

As an object-based artist concerned with developing new roles for pre-designed objects, Veronika creates compositions that strive to represent and utilise the pluralistic nature of contemporary art and contemporary life. The combining and finding of a new balance between various selected and handmade components run through her entire practice, consisting predominantly of sculpture, assemblage, collage, installation. The tension between artificial, functional, and ready-made elements and the organic shapes of intuitive material experimentation offers wide haptic diversity.

The rich local flora and fauna will be the starting point of her collaborative residency with local artist Haffendi Anuar. Veronika will be in residency at Rimbun Dahan for four months starting in February. 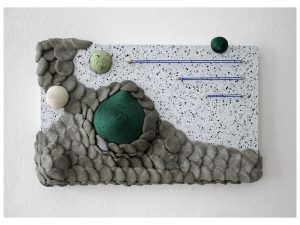 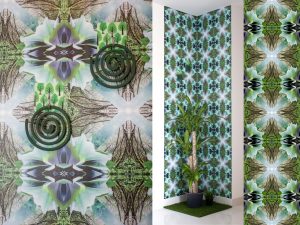 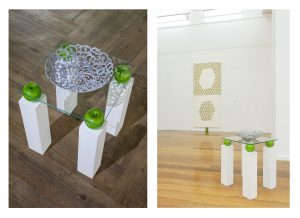 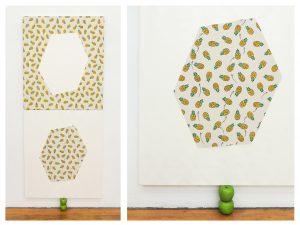 Azliza Ayob (b. 1975) is an artist who works in many mediums, such as painting, collage, and installation. Her most recent solo show was in 2014, titled All That Glitters, at Wei-Ling Contemporary in KL. She’s been working as an artist, facilitator, and educator for 15 years now (and counting), exhibiting both locally and internationally in Japan, Australia, Sweden, Madrid, and Barcelona. Azliza has also been part of Rimbun Dahan’s collaborative exhibitions with WWF, Art For Nature, multiple times in past years. Nature plays a strong part in her work and her inspirations, as seen in her initial statement of intent below:

I am preparing for the first of my autobiographical paintings in one show. I had started my ‘Adventures of Azliza Ayob’ series in 2009, while building Art History (Eastern Art) modules in a local university. While developing my research on manuscript and miniature paintings from great masters, I discovered that the missing link is to incorporate local elements which I believe can be solved if I photograph, sketch, interview and paint local plants and anything related on the function, purpose and local stories (medicinal). I want to change the function of plants from my previous paintings into a selection of the right flower/plant for the right meaning. Rimbun Dahan’s landscape is perfect for anything creative, it’s fresh, private and acts as a data bank for many leaves, plants and flowers. 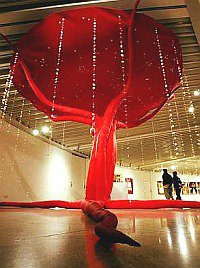 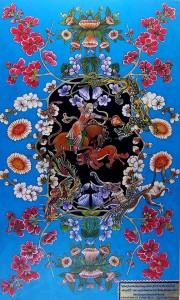 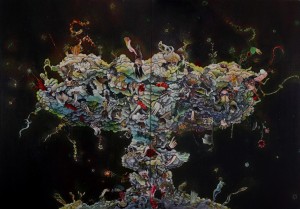 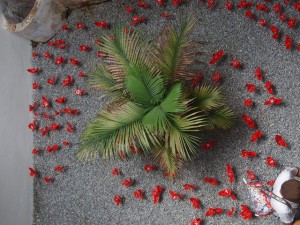 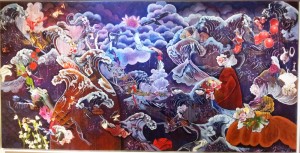 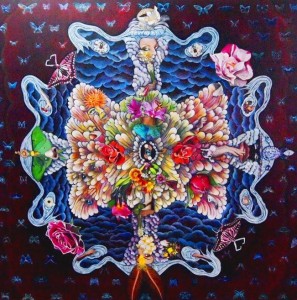 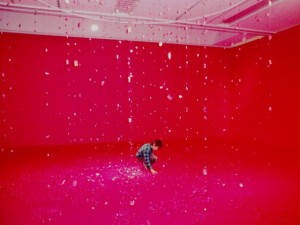 Choy Chun Wei is enjoying his time playing the “collector” and the “engineer” in Rimbun Dahan. Look around and you will find his workspace populated by jars and tubes of paint in different degrees of exhaustion, while piles of unidentifiable junk and a plethora of paraphernalia lay scattered across the floor. When I visited his studio recently, he tells me “I still return to the city to collect all this junk”. The process of collecting and constructing, or building, forms the root of Chun Wei’s artistic approach. Whether in the form of photographs, paint, ink, or other found materials, the potential in each of the artist’s materials will be stretched out, deconstructed, reconstructed and layered to present unique views of life within an urbanscape. Those familiar with Chun Wei’s body of work will recall his early photo-collage series such as Citadel and Link House from 2001. They were the result of a morning ritual whereby the artist would walk with his camera to work, photographing random exteriors of homes in Bandar Utama to relieve the monotony of this routine. The collection of photographs captured from these walks later grew into a series of musings about home within our fragmented urban environment seen through the eye of an outsider.

In his latest series, Construction Site, paint and found materials have replaced photographs to become the building blocks in the artist’s work. He tells me that every single paint mark and object is treated as an individual units, “like Lego blocks”, built layer upon layer, one over the other. Each work begins with the overlaying of paint onto the surface ground in broad sweeps. “I rarely know what is going to happen during the early stages so I just let it happen.” Once these initial sweeps have been established, ‘units’ of paint and materials are incorporated into and over the initial foundation through the use of a diverse range of tools – hands included – as well as other media to create a spectrum of marks and textures. It is clear, through this new body of work, that the artist has discovered a more instinctive and energetic process in creating image and texture; there is an obvious sense of play, as well as a newfound confidence in distilling the images to near abstraction.

The urban landscape and mapping continue to figure prominently in Chun Wei’s work. The ritual of returning to the city to collect the artist’s ‘junk’ bears poetic resonance in the artist’s dedication to his subject matter. While his mapping process may have begun within the immediate confines of Bandar Utama, his concerns have since extended into farther reaches, taking on a wider worldview beyond geography and tangible matter. Perhaps this development has been prompted by changes in the artist’s personal life. Marriage and moving out to a new home has shifted his outlook on life; he is no longer the wandering outsider looking in, but rather someone who has found hearth and home.

Construction Site begins with The Construction of Metaphysical Site I. While the spatial arrangement in this painting may appear conventional to the eye, it is nonetheless striking in its composition and form. It recalls the imaginary maps many of us would have drawn during childhood. Colours and simple geometric shapes are employed to demarcate different territories and densities while incidental marks may imply roads, railway tracks or borders. The Construction of Metaphysical Site II suggests a fantastical yet apocalyptic cityscape alluding to Italo Calvino’s Invisible Cities. Vertical forms, or monoliths, grow from opposite directions; they weave in and out of the dramatic foliage, moving towards each other, drawing closer to convergence.

Subsequent works such as The Changing Mindscape, Intimate Dwelling Site and Configuration l, demonstrate to the viewers that the spatial configuration in each painting has grown progressively tighter and denser through the course of development. The drama and density of this series culminates in the epic Big Dwelling Site. Impressive and intense, the painting’s expanse and tight overlapping layers of paint and found materials overwhelm the senses. The eye picks out the random details and unexpected textures as it roves through this dense forest of marks and colours; you will find bits of corrugated board here, unidentifiable slices of plastic and dried materials there, a shaved off bar code somewhere above. The painting possesses a cubistic resonance as the artist breaks up the picture plane to create multiple perspectives. They also remind us of Mondrian’s earlier paintings where grid and lines form the artist’s primary motives. Spaces move in and out, shifting from two-dimensional to three-dimensional planes, taking our eye on a manic ride through tightly wound nooks and crannies, before launching into exhausting claustrophobic areas that slowly ease off towards the edges.

Configuration lll (Breathing Space), one of the later pieces, sees the artist side-stepping his usual media employed in this series. It is perhaps the most carefree piece in this body of work, and as the title suggests, this painting provides a beguiling reprieve from the intense concentration of heavy impasto marks and texture. Here, the brush takes over from the palette knife to create a delicate yet intricate web of lines. They float evocatively in space, layered in muted neutral shades, amidst collaged drawings of furniture culled from the pages of an IKEA catalogue. The minimal treatment draws attention to the construction of the image, allowing the visual narrative and emotional content to exude its understated charm. 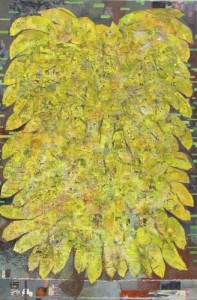 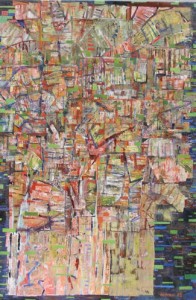 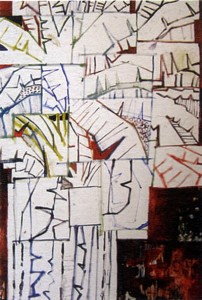 This is part of a series exhibited in Art for Nature 2005 that delves into the formation of mental maps to explore human dwellings within the landscape. The garden is a place for tactile and sensory engagement, where one may expand sensibility within space. Click on the thumbnails above to view larger images. 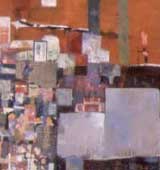 Choy Chun Wei (b. 1973) is a graduate and full scholarship holder from the faculty of Graphic Design at Central Saint Martins College of Art and Design, majoring in Illustration. He has been actively painting and exhibiting in a number of exhibitions in Kuala Lumpur and won an Honourable Mention at the Philip Morris Malaysia/ASEAN Art Awards in 2003. In 2004, Chun Wei received the Juror’s Choice Award (2D) at the Malaysian Young Contemporaries Exhibition organized by National Art Gallery. He became the artist-in-residence at Rimbun Dahan Artist in Residence Programme in 2005.