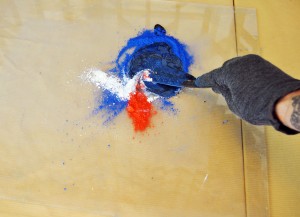 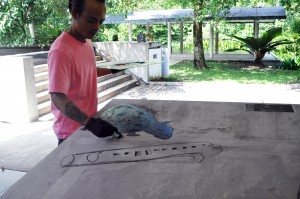 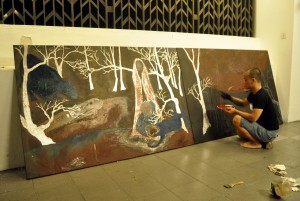 Working on his two pieces for the Bricolage exhibition (March 2015) 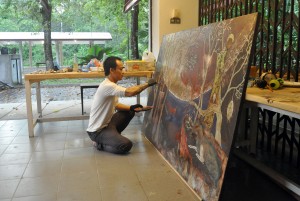 Working on his two pieces for the Bricolage exhibition (March 2015)

Tran Dan studied architecture in university, but his artistic career is built on self-taught painting and sculpture. His primal medium is lacquer, which is widely represented and used in Vietnamese traditional and modern arts. Tran is keen to further develop its form and use in art: lacquer with/as mix-material paintings/sculptures or (video) installations. He has made full use of Rimbun Dahan’s gardens and surroundings for materials to make into lacquers and paints. His collaborations with foreign cultural institutions in Vietnam, such as British Council, Embassy of Denmark, L’espace French Cultural Centre, and The Japan Foundation Center for Cultural Exchange have resulted in experimental videos and performances about human consciousness, dreams, Vietnamese culture, and food. Tran has also opened an independent art space in Hanoi where he organizes and directs programs for local and international artists. His recent lacquer paintings are inspired by the relationship between humans and animals, and by the power of humans and nature. Tran’s work explores the dreamlike rhythm of life, stories that are repeated every night; this also speaks to existentialism, a theme he consistently returns to.

For more information on Tran Dan and his work, visit his blog or his Facebook page.