In March 2014, Basque artists Naiara Mendioroz and Javier Murugarren spent a short residency at Rimbun Dahan. During their stay, they developed a duet work, also using the traditional wooden Basque musical instrument, the txalaparta, and the recently developed metal drum instruments, the hang.

They gave an open studio presentation of the work they created. They also experimented with using materials from the garden at Rimbun Dahan in the creation of costumes. 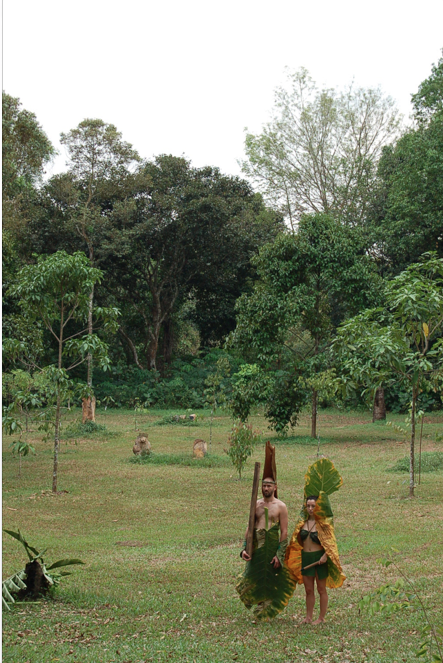 Graduated from the Official Ballet School of Pamplona (Spain) in 2000. In 2003, she graduated at the SNDO “School for New Dance Development” in Amsterdam. Following her graduation from SNDO she was awarded the DanceWeb scholarship for Contemporary Dance taking place at the Impulstanz in Vienna, Austria. She has danced for and toured internationally with various choreographers including Eleanor Bauer, Boris Charmatz, Nicole Beutler (piece based on Lucinda Child’s work), Frey Faust, Keren Levi, Peter Greenaway, Pere Faura, Paz Rojo, Mette Ingvartsen, Juan Dominguez, Beth Gill, Kate Mcintosh, Jefta Van Dinther and DD Dorvillier among others. She also works as a movement assistant for Nicole Beutler in the piece “The Garden”. Parallel to this, she has collaborated in a Dance project in N.Y teaching dance to women victims of domestic violence and at the moment she prepares her next project in Spain.

Formerly a sea sciences student in the Canary Islands, Javier arrived to the performance world in 1996. A pivotal encounter with El ojo de la Faraona dance company resulted in a decision to pursue performance and movement research. This brought Javier to Amsterdam, where he received a bachelor degree (2008) in dance and choreography from School for New Dance Development (SNDO). Javier’s work draws on a range of performance practices, including improvisation, choreography, cabaret, music, puppetry, video, and costume design. The distinctively eclectic and cross-cultural style of his costume designs has earned them a description as “post-folkloric punk”. Javier understands the performing body as “a mutant tool for an ongoing process of learning and adaptation.” His work has been presented in numerous countries, including Japan, Korea, Hungary, Turkey, Germany, Australia, New Zealand, USA, Spain and the Netherlands. He is a founder member of Instant Collective (2006), an Amsterdam-based performance collective. He also organizes Inkietas, an annual urban performance festival, in his hometown of Estella, in the Basque country of Spain. Other collaborative works have been made with Compaignie faim de siècle / Ibrahim Quraishi (Paris/NY), Trust company (South Korea), Duda Paiva (NL) and Azart-Ship of Fools (NL), Meekers (NL) and Maas (NL)