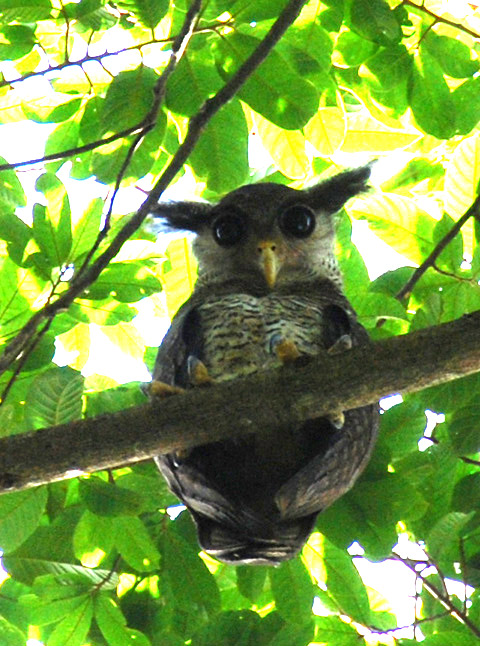 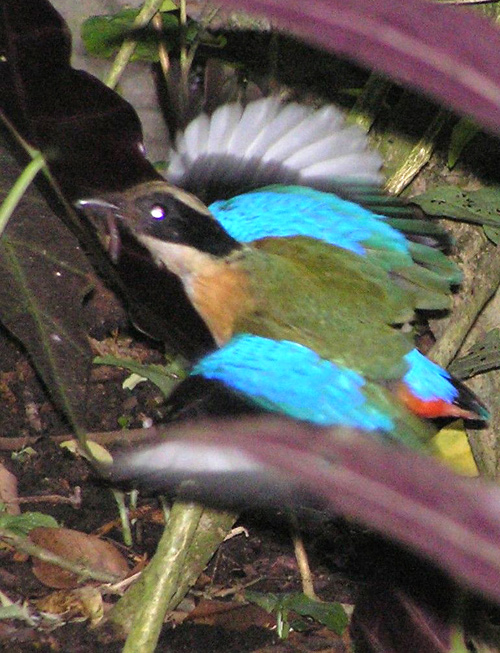 A blue-winged pitta flying in the garden. 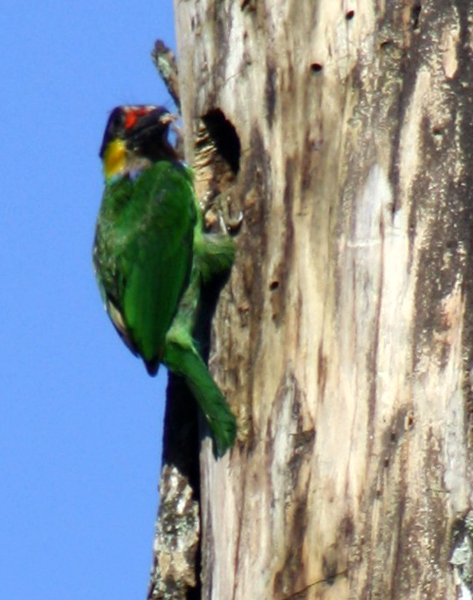 A gold-whiskered barbet on a dead tree.

Gardening is essentially a manipulation of the natural environment. We elect to save or eliminate, plant and nourish or neglect, and the result is a man made garden. For the naturalist, there is the added objective of nurturing as much of nature as possible, and this includes species other than plants. I have managed to educate the rest of the family that one does not have to kill snakes, bats or lizards; they do more good than harm, but at the same time I keep a close eye on the new puppy to make sure she isn’t taken by the biawak, the large monitor lizard that lives near the pond.

A large biawak, or water monitor, on the steps by the pond.

Birds win people over much more easily and do not evoke the same primal fear as reptiles. The brilliant flashes of colour as they swoop through the garden and fill another dimension with song ringing back and forth arouse a reaction in all humans, whether interested in the natural world or not.

I have perhaps thirty varieties of birds in my garden and they provide me with the greatest delight. The largest is probably the crested serpent-eagle, although the fish owl would be a close second. The eagles regularly launch themselves on the heat generated from a large paved area by the house, whistling to each other as they glide the thermals. The fish owl’s tawny beige is noticeable in low light and can sometimes be seen perching on the house beams over the fish pond or in the top of a flowering durian waiting for bats. Much more common are the white breasted waterhens who inhabit the pools and drains and are fascinating to watch as they hide their coal black young in bushy cover while both parents hunt for food. They breed prolifically, but numbers never seem to increase so the monitor lizards must be harvesting their share. These interactions between species make the life of a garden so interesting and reminiscent of our own lost habitat that we must unknowingly miss.

My early garden planting failed to consider other life groups so much, keen as I was to plant a forest of dipterocarps, the tallest fo rest giants. Unfortunately, most of these huge trees take years to mature and the seasons of flowering and fruiting are so irregular and unpredictable that they cannot be relied upon by wildlife for a regular source for food. Perhaps the plants that encourage birds most would be from the Ficus family, they fruit early and constantly and are sought by bats, mammals and birds. Unfortunately most planted by landscapers tend to be hybridized varieties that don’t fruit, wasting a great opportunity. Feeding animals can make a mess, but if they are well established they can also help with insect and pest control. With more predators to keep down the pests, plants and people suffer less from insect damage than they would otherwise.

Swifts and bats alternate between day and night harvesting flying insects, and the change of guard at dusk is remarkably precise: one never sees swifts in the sky with bats, nor is there a moment when there is nothing flying and swooping. 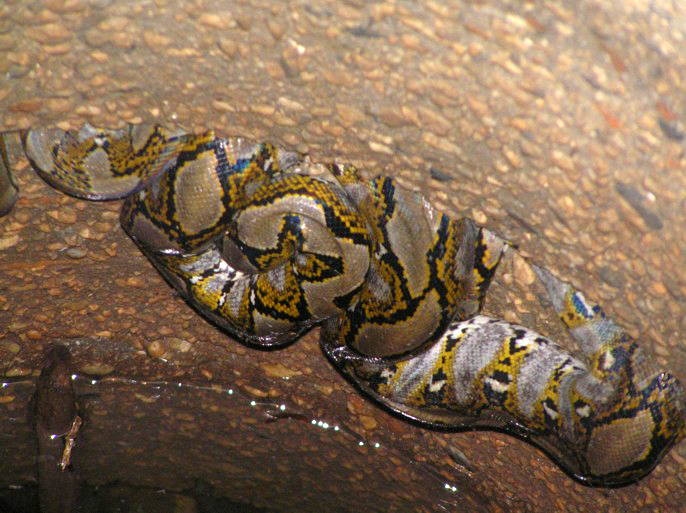 A reticulated python, in the well at Rimbun Dahan. Pythons help control the rat population.

The naturalist’s garden has to develop on the awareness that we share our space with other creatures. I may own the land, but other residents predate my claim so allowances have to be made. All species are an asset in one way or another, even the weeds in the vegetable garden can camouflage tender species. Snakes keep down the rat population and birds harvest insects and fruit, spreading seeds and fertilizing as they go as well as providing an important dynamic aesthetic. The final result may seem a bit chaotic but a growing understanding of the interactions greatly broadens the definition of ‘gardening.’

The birds are definitely the star performers. A huge colony of yellow vented bulbuls nests happily in a grove of red sealing wax palms and sends squadrons out each morning. A more individual character is the pied triller chooses to call from under a roof where its voice is effectively amplified, as it (presumably male!) competes with its own kind for dominance. The black-naped orioles offer flashes of brilliant yellow as they carol and swoop through the trees, and the white-throated kingfisher provides the contrasting blue, accompanied by its typical raucous shriek. A seasonal visitor is the tiny blue-eared kingfisher, arriving in pairs and identifying itself by its whistle but difficult to see. Only once have I seen the stork-billed kingfisher. Two varieties of woodpeckers and bee eaters, owls, swifts, spider hunters and sunbirds add to the population.

There are many shy small varieties that we occasionally glimpse but can rarely identify, and they tend to be eclipsed by the louder more spectacular species. Seeing a pair of racket tailed drongos cavorting around an old durian tree as their tails wove patterns in the air is an indelible memory. We also have a family of hill mynas, only visitors before but now resident, whose calls whistle and echo throughout. I occasionally see malkohas and the greater coucal, the former very discrete, the latter lumbering through the foliage in a rather ungainly manner. Often we get swooping formations of long tailed parakeets, shrieking loudly, and reminiscent of my ‘great parrot homeland,’ as David Attenborough called Australia.

Recently I visited Endau Rompin and was overwhelmed by the vegetation in the forest, especially seeing trees that I have as saplings and being able to identify the mature specimens. Bird life, though, was not visible although very much in evidence from the morning calls; the forest was too dense for a good view. A well established garden can be very rewarding for bird watching, especially if it is close to forested areas. Recently a sighting of a vigorous patch of brilliant red feathers sent me scrambling for the bird book; I fear I saw a trogon, an inhabitant of primary forest, and I can only surmise why it was in my garden. I have not seen it since and fear for its welfare, but I guess I must focus on what I can provide and keep planting as much as possible. 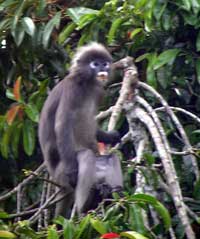 Dusky langurs are one of the monkey species seen at Rimbun Dahan. 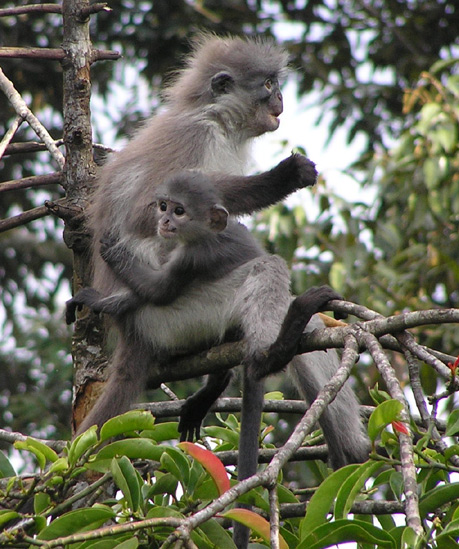 The baby langurs are intensely entertaining.

So many ills of living in a developed society seem to stem from losing touch with natural surroundings in terms of sharing one’s habitat with other species. Whether it is the occasional whiff of perfume from a flowering tree, the sight of a biawak catching the morning sun on a coconut trunk, the texture of a leaf or the flash of a bird swooping past, the experience tends to place one’ s sense of being into primal mode; another part of the brain takes over when recognition takes place.

The solely urban habitat does not seem varied enough for healthy populations of birds or humans. To belong to a place that i s sufficiently diverse and to interact with our environment seems to be intrinsic to the healthy ‘lifestyle’. How I hate that word, but perhaps it reflects the loss of our own habitat, to be replaced by a mere style, a loss that takes its toll on us as much as it does on the rest of creation.

Naturalist Gardening Tips: I have had trouble establishing a Cassia fistula for its wonderful cascades of golden flowers. Every time a new show of leaves sprout, white moths appear and lay eggs. Within days the leaves are destroyed by caterpillars. For some reason the garden birds have shown no interest in grooming the tree or catching the butterflies, but a recent innovation at organic pest control was to introduce a nest of kerengga, the large red ants that inhabit fruit trees. The ants attack the caterpillars and although there is still some damage, the trees are doing much better.

To move a kerengga nest requires determination, as they bite. Our method is to pull it off the tree with a fruit harvesting hook, and tie it in a plastic bag (as quickly as possible!) Hang the bag in the caterpillar infested tree and then break it open. The ants will quickly establish their territory. Should you wish to remove the ants, the nest can be burned by tying oils oaked rags on a bamboo pole, and setting it alight under the nest.

Birds are just as useful, but they cannot depend on a few plant species as food supply is too cyclical. A good variety of birds requires a wide variety of plants. The booklet produced by WWF Malaysia, ‘Bring Back the Birds’, is an excellent guide on what species will attract birds, either because they provide nesting materials, fruit or insects on which the birds can feed.