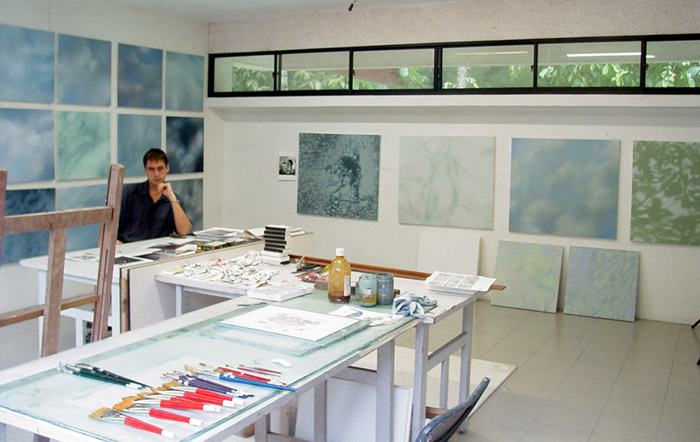 Troy Ruffels was the Australian resident artist of the year-long Malaysia-Australia Visual Arts Residency at Rimbun Dahan in 2003.

Troy Ruffels was born in Devonport, Tasmania in 1972. Upon completion of the 12 month Rimbun Dahan Art’s Residency in Malaysia he will return to Tasmania where he works and resides – overlooking the Forth Valley and farmlands of the Tasmania’s North West Coastline. Ruffels graduated from the Tasmanian School of Art @ Hobart, University of Tasmania (UTAS) with a Bachelor of Fine Art in 1994, where he was also awarded the degree BFA (1st Class Honours) in 1996. He obtained a Postgraduate Diploma ( with Distinction) from the Glasgow School of Art, 2001, and was in 2002 admitted to the degree Doctor of Philosophy ( Fine Art), University of Tasmania. 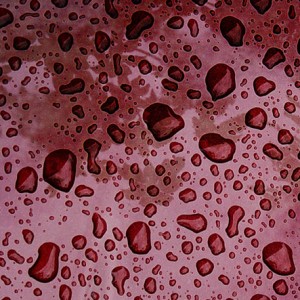 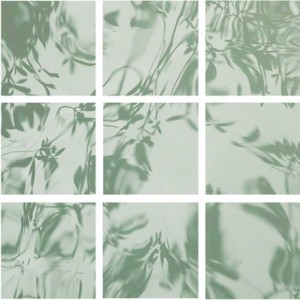 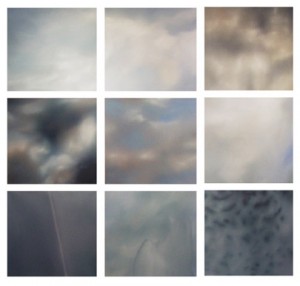 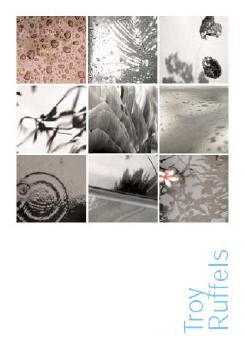 I have a memory of Troy Ruffels as the only outdoor coffee drinker in the hair-raising cold of a Tasmanian winter morning.  I would pass him most days on my way to university. All other patrons were on the inside of the cafe window, protected behind a curtain of condensed air, their heads in newspapers.  But the folded arms and casual sitting style of the outdoor patron belied the chill as Ruffels embraced the opportunity to observe and respond to the outdoor world, ‘gathering and collecting small details of the passing environment.’ [1]

This memory is five years old, and comes to me in irony as I consider the work that has evolved during 12 months in tropical Malaysia. In the heat saturated studio at Rimbun Dahan, Ruffels continues to be fuelled by the natural elements that exist in the urban environment.  The images conceived there reveal that the artist’s interest in an emotional sense of place travels with him, and is not limited to, nor lost without, his home in Tasmania. Alert to the smells, sounds and sights intrinsic to the places he visits, the artist is a filter for these experiences and memories to distil, and ultimately take root in paintings and photographs.

The works in Sampled Reality simultaneously ground and throw the viewer. They form a push me – pull me map from diaristic imagery that has been snatched by the artist from its otherwise temporary moment of beauty and being. We are grounded in the panoramic and all encompassing scale of the works, and settled by the poignant aesthetic of each reflection. Ruffels’ work draws you in, offering a journey through the artist’s experience of the world around him.

Rain. Trees. Clouds. These soft aspects of nature settle almost too comfortably in the seemingly impenetrable surfaces of new cars, puddles, glass, and hard, wet ground.  Reflections in such urbane, ever-present fabrics are not something we usually register consciously.  We look at the object itself, rather than the image nesting within it. Reflections do not break surfaces like scratches, dents, ripples and graffiti. Instead, they briefly accommodate the shape of the object and are almost camouflaged to eyes unaccustomed to looking beyond the expected. Ruffels has trained himself to see, snaring these apparitions as they pass across the object’s skin, and revealing the world’s infinite network of reflected, subterranean passages.

The viewer experiences subtle confusion in the artist’s use of reflection, for we normally register reflection through the live, mirrored image of ourselves or our immediate environment. The artist has further evaded other mirrored references by ensuring no part of himself is captured in the photograph.  Trees, sky and stone are gently altered by the blurred movement, muted colour, shifting focus, and colliding imagery characteristic of these urban reflections. These subtle transformations trigger a sense of unease as one recognises that the painted or photographed image is not taken directly from its subject.  Ruffels crops the imagery so that the edge of the reflective surface is gone. The image is floating.  ‘Sky, tree and stone hang suspended’ as the frameless, softly mirrored world turns the tactile world on its head. [2]

In Malaysia, after years of working with photo media, Ruffels has again taken up painting.  He writes that putting paint on canvas allows for ‘prolonged sensorial engagement’ with the subject, sensing that real value of the work is in the ‘process of engagement with the world, and the processes through which [the subject] is interpreted, and brought to life in the studio’. [3]The moving brush across canvas is not unlike the reflection moving across its surface, however the brush passes back and forwards, often repeatedly over the one area, as the image materialises. As each work-in-progress develops as an archive of the reflection, the painter exists in a world divined by instinct, a ‘continuous cycle of experience, response, and expression.’ [4]

It is hard to fight romantic writing when considering Ruffels’ imagery. Descriptions of the work are easily loaded with words like ‘poignant, whimsical, ephemeral, ethereal’. This is because the work is all of these things.  Ruffels makes no bones about the fact that his art is rooted in poetry and imagination, emotions, memories and histories.  Each piece is a layering process of experiences and responses to the natural environment.  The artist ‘takes’ natural forms to construct the images, and creates only beautiful works that trigger the human desire to experience something breathtaking.  In doing so, Ruffels drives the viewer into a flip-book of emotional responses, inciting us to reflect upon the extraordinary possibilities of the world sub-surface.

Ruffels has always responded directly to his immediate environment.  In Tasmania, photographic works about reflections were printed in steel grey, cold blue, and later, a metallic pink.  The rain, in its refected form, felt as if it would sting one’s skin, the waves were blackly Antarctic, and the path of the birds was ominous, as if a southern storm was brewing. Five years later, he wrote to me from Malaysia:

I have continued to work with reflections of nature in the environment.  It is a meaningful motif, which I embrace. It signifies the possibility that another world exists other than the one we are able to subject to rational analysis.  It gives rise to the possibility that there are other pathways we may travel in life – another level of appreciation, of understanding, of communicating with the world we inhabit – other than the one that is sold to us as being real … and subsequently finite. [5]

In the uncanny beauty that emanates from the images reflecting from duco or murky pools of water, there is a moment where one is uprooted by a feeling of wonder in the world, an awe-inspiring second of realising how small we really are, a flash where one is lifted through the clouds, or dipped beneath the molten surface of the water.  The gentle manipulation of natural elements, captured reflections, the transformation of passé surfaces, and the devout attention paid to an urbane instant catch the viewer in a sensory eclipse. Brief moments of recognition are surpassed by super-real interpretations of the physicalworld. These sensations linger as the viewer moves from the work, only to come across fragments of Ruffels’ imagery all around, and ordinary experiences intensify as reality is sampled by both artist and the viewer. 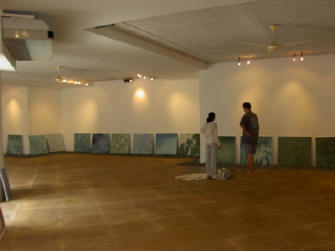 Above: Troy and Anne Morrison standing in the underground gallery at Rimbun Dahan.