Yau Bee Ling was one of the Malaysian artists of the year-long Malaysia-Australia Visual Arts Residency in 2005. 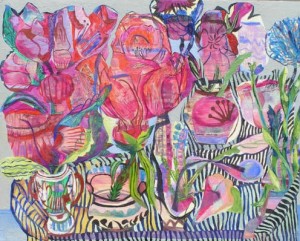 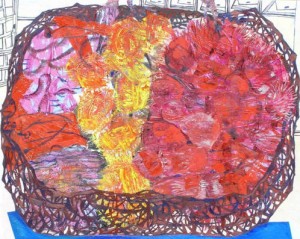 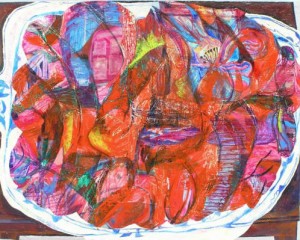 Above: From The Gardener Series – exhibited at the 2005 Art for Nature exhibition in Rimbun Dahan.

Yau Bee Ling was born in 1972, Port Klang. She graduated from Malaysian Institute of Art (1992-1995) with award of full scholarship in fine art course (painting). Since then, she has been actively practising and exhibiting in Kuala Lumpur since she graduated in 1995. She was selected by the National Art Gallery to represent Malaysia at the 9th Asian Art Biennal in Dhaka, Bangladesh in 1999. In 2000, she was selected by the renowned regional curator T.K. Sabapathy to exhibit at Singapore Sculpture Square. In 2002, her paintings were chosen to exhibit at the 2nd Fukuoka Triennale, Fukuoka Asian Art Museum and her paintings were collected as part of the Fukuoka Museum permanent collection. In 2004, her paintings traveled to Hokkaido Museum of Contemporary Art as part of “Soul of Asia: Fukuoka Asian Art Museum Collection”. In 2005, she was awarded as Rimbun Dahan, Malaysian – Australian Artist-in-Residence programme which was generously supported by Hijjas Kasturi Association/ Rimbun Dahan, Kuala Lumpur.

If there is one thing that characterizes moving out of a home and into a new one, it is the humble cardboard box. More than being a container for objects, they also hold memories, histories and hopes for the future. Looking at Bee Ling’s previous works that paint the idiosyncrasies of home life in all its ritual complexity, and now at the new series created during the year-long Rimbun Dahan residency, I am reminded strongly of unpacking a cardboard box in a new house – the jumble of the past colliding with a heady anticipation of new independence.

Rimbun Dahan has been a transition of sorts for Bee Ling. Together with her husband and fellow artist, she has moved out of the old family home into new territories and new roles. What sort of home has Rimbun Dahan provided for the artist? It was always to be a temporary abode, but dwelling somewhere for any amount of time means that habits are developed, certain rituals invented, and time and care is devoted to one’s surroundings. This is the nature of inhabitation. No place is ever neutral, nor stays unchanged if you place someone in it.

Hence we are presented with paintings that act like windows looking in and out. In the foreground, views are framed – here by a stripe of color, there by the cheerful edge of a floor rug. We look in upon traces of life lived at Rimbun Dahan. In Celebration, for example, a multitude of empty glasses tells us light-heartedly of the consumption and chatter that accompany a heightened social occasion. Windows in the background leading to the world outside reinforce the in-between nature of these works, reminding us (and the artist) that all this must sit in context of a wider societal picture.

A period of transition is also one of negotiation. For Bee Ling, there are many roles to play as artist, wife, woman, daughter and now, daughter-in-law. In between must lie the personal search for individuality. As such, in the paintings, tables become platforms for a parliament of objects. It is not so much what is depicted, as the way they are grouped. They crowd each other, jostling for space and prominence, much as one must feel torn between fulfilling the many expectations of society, family and the self. There are quieter dialogues though, such as in Make-up set on Pink Table and Typewriter on Pink Table. These reveal a calmness that exists within the intimate private space of a person.

We could see the home as a container for all aspects of our lives – basically everything we put into a cardboard box upon moving out, as well as our very bodies. There are many symbolic containers in Bee Ling’s works, taking the form of baskets, which sit large upon the aforementioned tables. The objects that fill these containers are less defined, blurring into each other in a riot of color that threatens to overspill the confines of the basket, onto pristine table-tops and into the surrounding environment. These seem to speak of emotions and the sheer energy of living, the fruits of which are naturally a vibrant and at times chaotic harvest.

Here we see the artist pushing the potential of her medium, reveling in paint’s materiality to convey thought and feeling. In Working Hard in the Kitchen, for example, a basket is filled with a jumble of groceries. The brushstrokes overlap each other on a surface that is built and rebuilt again. These painterly gestures are almost self-contradictory – having started by making meaning, the artist proceeds to efface that meaning with other layers. This is reflective of a self-identity that is mutable and in constant change. After all, as any cook will tell you, in the kitchen one must be organizer, toiler, purchaser, and provider!

Moving out also means moving on. It takes courage to do so, to recognize the need for personal privacy, freedom and individuality. These are as important as the familial ties that bond people together. As much as we move into a new place, we carry with us that which has made us what we are. Yet if we hold on too firmly to the past, we can stifle the opportunity for growth. I see these new paintings as a transition between moving out and moving in, a record of the first brave steps into a world and a home of one’s own making.

Sharon Chin is an artist and writer. She majored in sculpture at Victorian College of the Arts in Melbourne, Australia and has been living and working in Kuala Lumpur for the past year.

My garden does not exist in reality but evolved as a mental picture of those who inhabit it; a garden that oscillates between dream and reality. It changes from a site for self-discovery to a place for cultivating personal vision.The Gardener Series – exhibited at the 2005 Art for Nature exhibition.