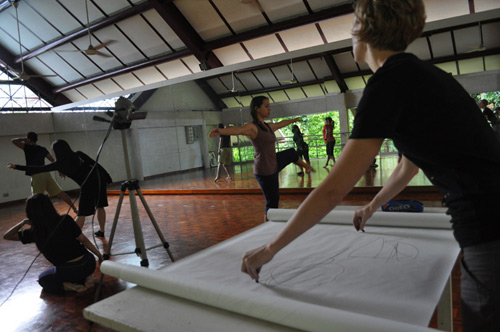 Rochelle Haley drawing during a rehearsal of ‘Strings’ in the dance studio at Rimbun Dahan.

Rochelle Haley was one of the Australian resident artists of the year-long Malaysia-Australia Visual Arts Residence at Rimbun Dahan in 2009. In addition to her practice creating works for the joint exhibition with Australian artist Monika Behrens and Malaysian artist Shamsudin Wahab which was presented in the Underground Gallery at Rimbun Dahan from 28 February to 14 March 2010, Rochelle also participated in the contemporary dance performance Strings at The Actors Studio Theatre in January 2010.

The exhibition at Rimbun Dahan included the ancillary event, ‘High Tea at the Pleasure Garden’, a discussion moderated by the managing editors of online arts writing platform ARTERI (Eva McGovern, Simon Soon & Sharon Chin) based on the site-specific installation Pleasure Garden by Monika Behrens and Rochelle Haley in the newly constructed Penang House at Rimbun Dahan. 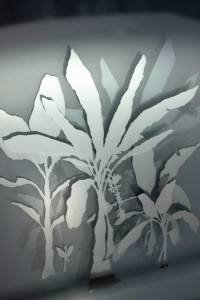 Rochelle Haley is a Sydney based artist working broadly within the fields of experimental drawing and installation. She has recently completed a PhD at the College of Fine Arts, University of New South Wales where she also holds a Bachelor of Fine Arts Honours degree. Haley has held several solo exhibitions of her work the most recent of which in February 2009 titled Land Incorporated at the Ivan Dougherty Gallery, Sydney. She has also shown extensively in group exhibitions in Australia and abroad including the Helen Lempriere Travelling Art Scholarship at Artspace, Sydney, CIGE, Exhibition Hall China World Trade Centre, Beijing, Fading Lines, Nomad Gallery, Islamabad and the 3rd International Triennial, Marmara University, Istanbul.

Central to Haley’s work is the exploration of the relationship between the human subject and their physical and social environment. Recently this concern has been expressed through a series of incised paper works investigating the relation between the land, the body and its representation. Imaging the landscape using unusual methods of ‘drawing’ with blades and carving into heavy white paper, Haley creates artworks that require a viewer to negotiate light and texture.  The appearance-disappearance of the landscape is dependant upon the proximity and changing position of the viewer as they attempt to achieve a clear view. The drawings create awareness in the viewer of the position and movement of their body in relation to the work. The subjects Haley primarily takes for her work are landmarks of great cultural value recognised by their inscription on the UNESCO World Heritage List.

In a collision between dance and drawing, the movements of a dancer are transformed into a series of lines drawn live by Rochelle Haley. Other dancers then use these visual cues to interpret their own movement. A unique performative process which changes every time it is performed, Strings gives us insight into new ways to produce art and movement.

Performed by Australian visual artist Rochelle Haley and dancers of Rimbun Dahan and ASWARA, at The Actors Studio Theatre at Lot 10, 23 January 2010. 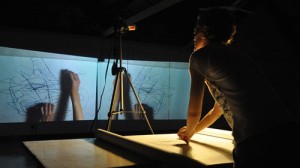 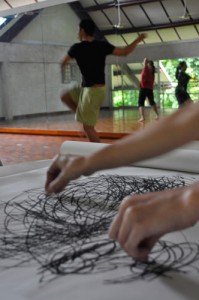 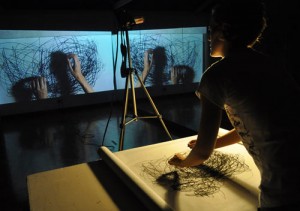 One thought on “Rochelle Haley”